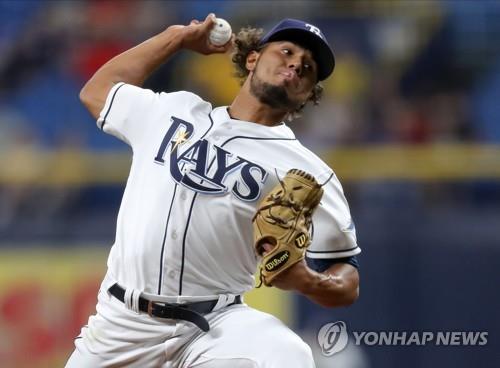 KBO clubs are each permitted three import players, with a maximum two pitchers. The Wyverns ended this past season with Angel Sanchez and Henry Sosa on their pitching staff and said they'll now try to bring back Sanchez.

Pinto's signing will end Sosa's Wyverns' stint after just half a season. Sosa was acquired in June in place of Canadian pitcher Brock Dykxhoorn and went 9-3 with a 3.82 ERA in 16 starts.

Those were decent numbers, but Sosa struggled with his conditioning during the season and struggled in the postseason.

Pinto has 27 big league games to his credit, mostly recently two outings with the Tampa Bay Rays this year. He spent the majority of 2019 in Double-A and Triple-A, going a combined 12-6 with a 4.23 ERA in 28 appearances, including six starts.

The Wyverns said they first took interest in Pinto in 2018 and said he is armed with a dominant four-seam fastball, along with a two-seamer, changeup and curve.

"He's still young enough that he should be able to pitch for us a long time," a Wyverns official said. "Multiple major league team officials have told us he's a talented pitcher with a great attitude, too."