SEOUL, Nov. 13 (Yonhap) -- The international community must work together to more actively address North Korea's "grim" food crisis and step up efforts to help relieve the situation outside the realm of politics, a senior U.N. aid official said Wednesday.

Ursula Mueller, assistant secretary-general of the U.N. Office for the Coordination of Humanitarian Affairs (OCHA), made the appeal as the communist state is facing its worst food shortages in recent years, hit by natural disasters and economic difficulties amid U.N. sanctions.

"The picture is really grim, and I am afraid it could further deteriorate if no actions are taken and especially if we don't receive urgent additional funding," she said in a written interview with Yonhap News Agency.

"Humanitarian agencies in DPRK need more money for vaccines, medicines, lifesaving therapies for malnourished children and safe drinking water. We must not wait for geopolitics to run its course to alleviate the suffering of millions of people," she said. DPRK stands for the Democratic People's Republic of Korea, the North's official name.

Mueller was in Seoul this week for an annual policy consultation meeting with South Korean officials aimed at enhancing cooperation in the humanitarian field.

Recent reports by U.N. agencies show that North Korea's food production last year was 9 percent lower than the previous year -- the lowest production in more than a decade -- and 11 million people, or 40 percent of the population, are in urgent need of food. 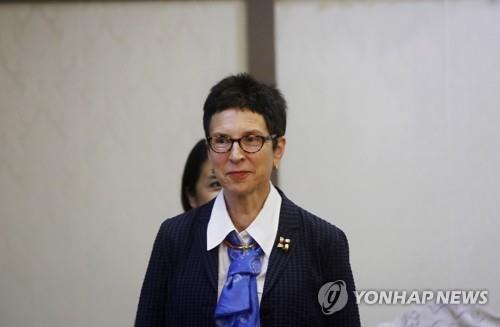 Mueller said the food insecurity in North Korea has become a "multifaceted" issue, combined with the protracted dry spell and an increasing vulnerability to natural disasters, like the case of Typhoon Lingling that struck the peninsula in September.

"You have a multifaceted, protracted food insecurity situation. Dry conditions have persisted during the critical 2019 main crop season and are likely to further compromise food security over the coming months," Mueller said.

"OCHA field visits found that maize, rice, chestnut and vegetable crops were damaged and up to 60 percent of soybean production was destroyed by the impact of Typhoon Lingling," she said.

South Hwanghae Province, commonly referred to as the country's breadbasket in the southwest, reportedly only received 50 percent of average rainfall from April to July this year.

"We will continue to work with (related organizations) and other member states to joint our efforts to depoliticize humanitarian assistance, increase resources to be able to better respond to the vital and urgent needs of the most vulnerable but also to prevent a deterioration of an already alarming situation," Mueller said.

In order for such efforts to gather ground, more contributions from donors are essential, she said, given that the funding for North Korea remains at the lowest level among the beneficiary countries.

OCHA has raised $32 million for North Korea this year to date, only 26.6 percent of the target amount. It represents the lowest amount collected for an aid recipient country, and the third lowest in terms of percentage of target achieved.

"The appeal remains critically underfunded especially as we have entered the last two months of the year. Humanitarian operations in DPRK are a critical lifeline for millions of people and beyond the numbers the human cost of our inability to respond is unmeasurable," she added.

Mueller stressed that the U.N. aid agencies are rigorously monitoring the programs to ensure assistance is reaching the most vulnerable. According to OCHA, U.N. aid agencies made 1,855 site visits across all of the North's 11 provinces last year.

"The U.N. and its partners will be able to swiftly scale up delivery of aid to those most in need and closely monitor the deliveries so that donors know their funds are well spent," she said.