SEOUL, Nov. 14 (Yonhap) -- The U.S. military chief vowed Thursday to use "the full range of U.S. military capabilities" to defend South Korea as the allies held annual talks between their Joint Chiefs of Staff chairmen, the two sides said.

"He affirmed that the U.S. remains prepared to respond to any attack on the Korean Peninsula, using the full range of U.S. military capabilities," the statement said. 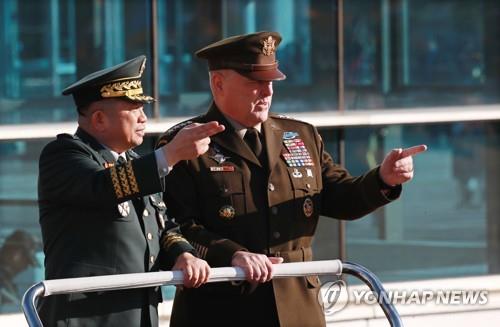 During the meeting, the two sides received updates on the security situation on the Korean peninsula and in the region, and discussed measures to strengthen their defense posture, they said, adding that the two chairmen recognized the importance of such talks "during this critical time" to demonstrate "the strength and credibility of the military alliance."

The meeting took place at a time when North Korea has fired missiles amid little progress in its denuclearization negotiations with the U.S. The communist country launched short-range projectiles, including ballistic missiles, 11 times so far this year, and launched a new version of a submarine-launched ballistic missile (SLBM) on Oct. 2.

Security situations on and surrounding the Korean Peninsula have also become complicated in recent months.

In July, a Russian warplane intruded into Korean airspace over South Korea's easternmost islets of Dokdo twice, while China and Russia were conducting their first joint air patrol.

Over the course of the patrol, two other Russian and Chinese military aircraft entered Korea's air defense identification zone (KADIZ) without prior notice.

According to the statement, the two commanders also "acknowledged the critical nature of multinational partnerships and agreed to further strengthen efforts for regional peace and stability."

The multilateral partnership could indicate the trilateral security cooperation involving Japan, which has drawn attention as the intelligence-sharing pact between Seoul and Tokyo is set to expire on Nov. 23.

Asked if he discussed the military information-sharing pact with Park, Milley told reporters, "We did a little bit," without further elaboration.

In Tokyo, following his meeting with Japanese Prime Minister Shinzo Abe on Tuesday, the U.S. military chief said, "We want to try to resolve that issue before it expires." 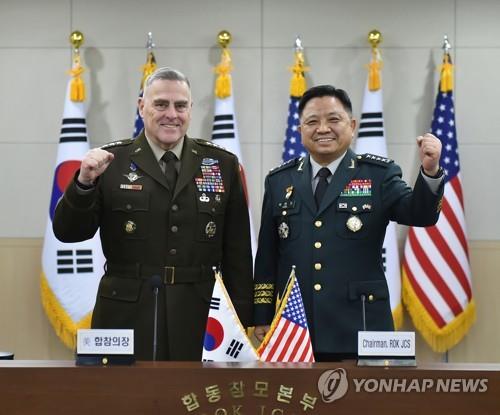 Also on the table was "the efficient transition" of wartime operational control (OPCON) from Washington to Seoul, according to the statement.

They reviewed the results of the initial operational capability (IOC) test for the OPCON transition, which was conducted by the allies during their combined exercise in August, officials said. The exercise was to verify whether Seoul is on course to meet the conditions for the transition.

The banquet was designed to mark this year's MCM and SCM, according to its organizers, the Korea-U.S. Alliance Foundation and the Korea Defense Veterans Association.

U.S. Defense Secretary Mark Esper was also scheduled to attend the event, but he was absent as he was to arrive in South Korea behind schedule, reportedly due to some problems with his aircraft.