SEOUL, Nov. 14 (Yonhap) -- Foreign Minister Kang Kyung-wha is unlikely to visit the United States before the planned termination next week of South Korea's military intelligence-sharing pact with Japan due to a scheduling problem, sources said Thursday.

Kang had considered traveling to Washington for talks with U.S. Secretary of State Mike Pompeo and other officials in an apparent effort to seek their understanding of Seoul's position ahead of the Nov. 23 expiration of the General Security of Military Information Agreement (GSOMIA) with Japan.

South Korea decided in August to end GSOMIA in response to Japan's export restrictions against it in a row over wartime forced labor. The U.S. considers the pact a key pillar of trilateral cooperation with the two Asian allies and has strongly called for its renewal.

But sources said that Kang's trip to the U.S. is unlikely before the GSOMIA deadline as it has been difficult to set up a meeting in time with Pompeo, diplomatic sources familiar with the matter said.

"We can always discuss matters of mutual interest with the U.S. through high-level exchanges whenever schedules allow it," a source said.

As the GSOMIA deadline approaches, Washington has been heaping pressure on Seoul to reverse the decision.

Secretary of Defense Mark Esper said Wednesday en route to Seoul that GSOMIA must be maintained, stressing the importance of sharing intelligence in the event of any North Korean provocations.

U.S. Joint Chiefs of Staff Chairman Gen. Mark Milley made a similar remark in Japan on Tuesday when he met with officials there, saying ending the pact will serve to benefit China and North Korea.

In an interview with South Korean media this week, U.S. Forces Korea Commander Gen. Robert Abrams warned that the GSOMIA termination could send the wrong message that the U.S. and its two allies are not strong enough to ensure security in the region.

Seoul has maintained that any reconsideration would be possible only after Japan first reverses course.

Kang is also considering attending the Group of 20 foreign ministers' meeting slated to be held in the Japanese city of Nagoya on Nov. 22-23, a ministry official said. If she decides to be there, attention will be drawn to whether she will hold talks with her Japanese counterpart, Toshimitsu Motegi, to discuss the current row. 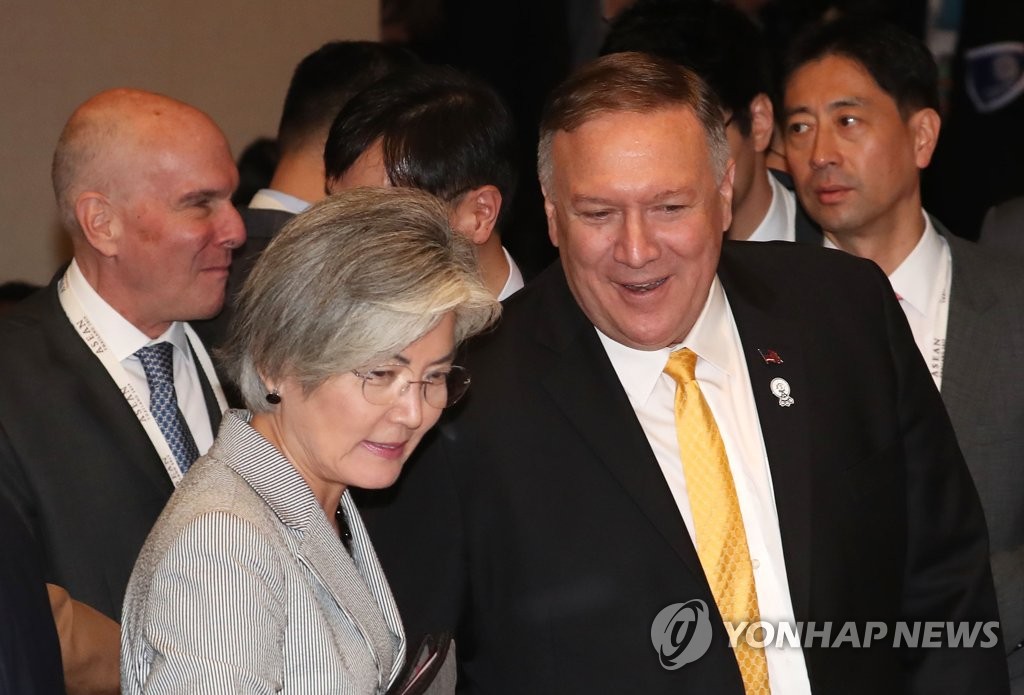 (LEAD) FM's visit to U.S. unlikely to take place ahead of GSOMIA deadline

(LEAD) FM's visit to U.S. unlikely to take place ahead of GSOMIA deadline