U.S. officials have called strongly for renewing the pact as they consider it a key pillar of trilateral security cooperation with the two Asian allies in a region marked by an increasingly assertive China and a nuclear-armed North Korea.

Asked about the ministry's view on the U.S. continuing to publicly pressure Seoul, the official simply said, "We see that as emphasis on the importance of coordination among friendly countries."

Asked about U.S. Defense Secretary Mark Esper's comment that joint exercises with South Korea could be adjusted if diplomatically necessary, the spokesperson said that the military authorities of the two countries have been in support of ongoing diplomatic efforts for the denuclearization of North Korea.

Esper made the remark during a press gaggle en route to Seoul after North Korea's State Affairs Commission, the country's highest decision-making body, warned that Pyongyang could give up on diplomacy and choose to take a "new way" if the U.S. and the South go ahead with their planned joint exercises later this month.

Choi said that Esper's comments are believed to be within the context of the U.S.' "flexible approach" to the denuclearization negotiations with North Korea, adding that the allies have staged combined exercises "in an adjusted manner under close coordination."

Officials have said that Seoul and Washington are planning to carry out scaled-back air drills, in contrast to the Vigilant Ace exercises that were conducted until 2017 before being suspended last year amid peace efforts involving North Korea. 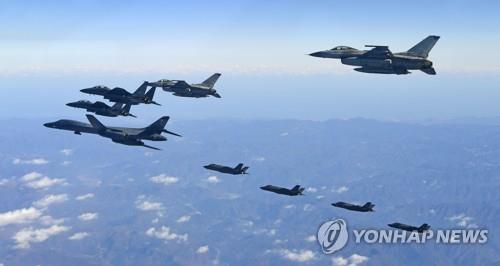