SEOUL, Nov. 14 (Yonhap) -- Haeundae Beach, one of the most-visited tourist spots in the city of Busan, and its surrounding areas will be lit up with colorful lamps this week to celebrate an upcoming special summit between South Korea and the Association of Southeast Asian Nations (ASEAN) in the city.

The Haeundae district office will kick off its annual Haeundae Lighting Festival on Saturday in celebration of the 2019 ASEAN-Republic of Korea Commemorative Summit, slated for Nov. 25-26.

The borough office decided to throw this year's festival about two weeks earlier than previous years to specially mark the national event. The lighting festival will continue till Jan. 27.

The tourist area's landmark 101-floor LCT tower and its two adjoining skyscrapers will also celebrate the event with a special lighting ceremony during the two-day summit and the following Mekong-ROK Summit set for Nov. 27. 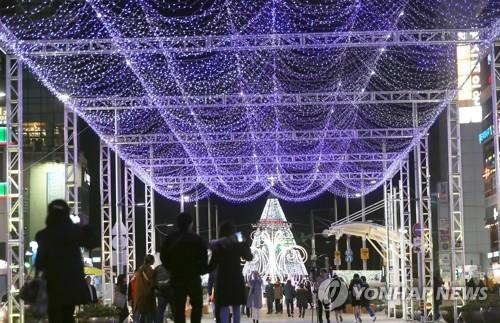 The Jung district office in Busan's city center has also moved up its annual Christmas Tree Culture Festival to kick it off on Friday this year in celebration of the summit.

The borough's main streets will be illuminated with Christmas lamps as part of the festival, while a special forest zone featuring 10 Christmas trees bearing the flags of the 10 ASEAN nations will also be formed in the area.

The borough will also mark the summit by creating a "ROK-ASEAN commemorative road" during the festival that will continue till early January.

The city of Busan will also be celebrating the summits with a variety of events that link South Korean culture with the cultures of ASEAN countries, including a multicultural culinary festival and a film festival.

"Korea-ASEAN Food Street," scheduled for Nov. 15-27 in Busan's Jung district, will bring together high-profile chefs from the 10 ASEAN nations to present the countries' local cuisines.

On Nov. 16, the city will dole out coffee that is specially blended from beans from the Asian countries.

Other celebratory cultural events include arts exhibitions and a fashion week in the city.

The highlight of the cultural events will be a star-studded K-pop concert on the eve of the summit.

The city of Changwon, west of Busan, will throw "ASEAN Fantasia" at Changwon Velodrome the evening of Nov. 24, bringing together such high-profile K-pop stars as Psy, BoA, NCT 127 as well as Se So Neon, a local rock band.

The concert will also feature a number of top-rate singers from ASEAN nations. The concert will be broadcast live by Korean channels before Korea's English-language global broadcasting channel, Arirang TV, broadcasts it worldwide. 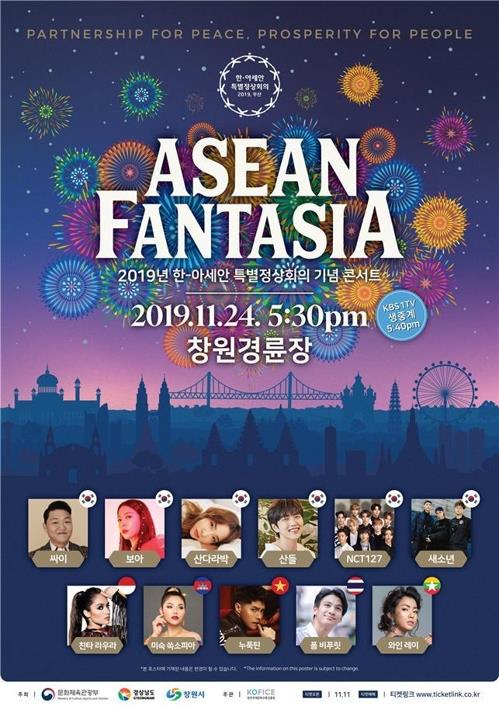