The two men in their 20s were sent back to the North through the truce village of Panmunjom last week, five days after they were captured near the eastern inter-Korean sea boarder. Three days of investigation found that they had been fleeing authorities after killing 16 fellow crew members on their boat.

After their capture, the North Koreans expressed a desire to defect, but the South dismissed their intentions as insincere. Officials also said that the North Koreans were deemed a potential danger to South Korean society and could not be recognized as refugees under international law.

Critics, however, denounced the government for hastily repatriating them based only on their confessions and just three days of investigation at a time when little hard evidence was available. Some said that their human rights have also been violated, given that they will likely face torture and even death in their communist country. 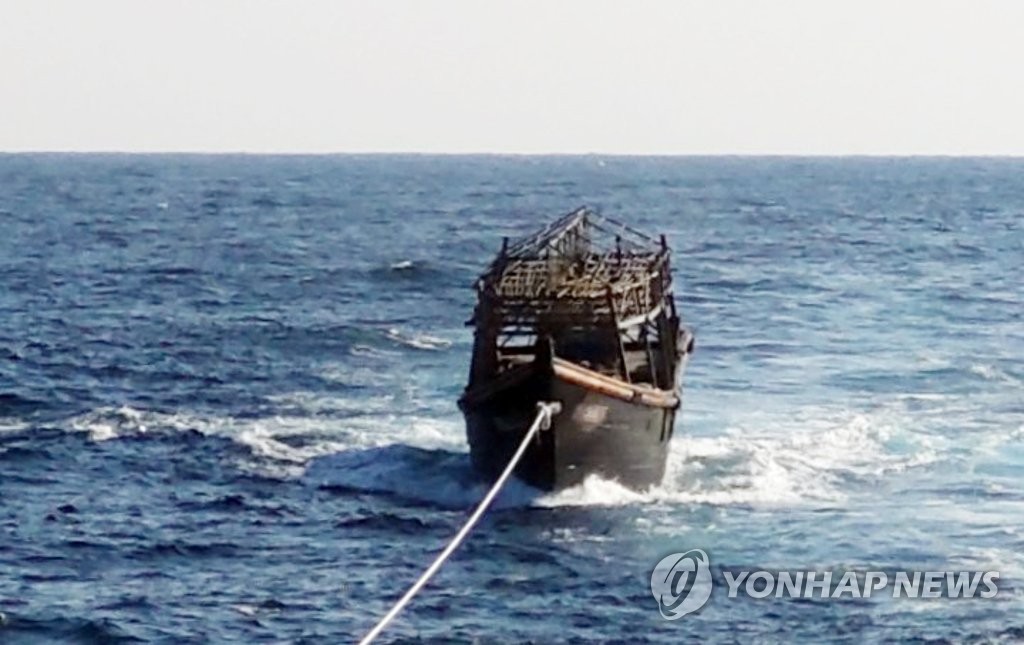 "We handled the matter by following principles and standards," the official said on condition of anonymity during a meeting Wednesday with the unification ministry's press corps on this island located northwest of Seoul.

"Given that investigators with a lot of experience from all (relevant) authorities participate in such interrogations, three days of investigation is not a short period of time," the official said.

Some claimed that the North Koreans should have been protected as stipulated by South Korea's Constitution, which considers North Korea as part of its sovereign territory.

Under Article 3 of the Constitution, South Korea's territory shall consist of the Korean Peninsula and its adjacent islands. Some legal experts say that the North Koreans should be regarded as South Korean citizens once they land on its soil and ought to be protected from deportation no matter what.

The ministry official rebutted the criticism, saying that the issue should be approached from multiple angles with a balanced point of view.

He was referring to Article 4, which states South Korea shall seek unification, formulate and carry out a policy of peaceful unification based on the principles of freedom and democracy.

The official said that last week's deportation was an unprecedented and "special" case that cannot be approached in the same manner as other defection cases.

"No such incidents have happened between the two Koreas before," he said. "Considering that such a thing will not likely happen again, we shouldn't handle (last week's) case by bundling it together with other cases. We need to recognize the distinct nature of the latest incident."

With regard to a long-suspended tour program to North Korea's Mount Kumgang, he said that the government should draw up ways to avoid the possibility of global sanctions violations if it allows individual citizens to travel to the mountain.

South Korea has hinted at allowing individual trips to Mount Kumgang on the North's east coast if progress is made in talks with North Korea in guaranteeing the safety of its citizens.

The government appears to be considering the option in an apparent bid to prevent the tour program from complete closure following Pyongyang's threat to end the joint project.

"In order to start individual trips (to Mount Kumgang), the two Koreas need to reach an agreement on the safety issue," the official said.

"To make it happen under sanctions, we also need to draw up measures to avoid collision with provisions of the sanctions. I think there will be a great number of possibilities with regard to it and various methods (to avoid sanctions violations)," he said.

Launched in 1998, the tour program was regarded as a symbol of inter-Korean reconciliation and economic cooperation. About 2 million tourists visited the mountain until it was suspended in 2008 when a South Korean tourist was shot to death by a North Korean soldier.

Safety guarantees for travelers have been regarded as a prerequisite for the resumption of the tour program. Global sanctions have also been blocking its resumption amid worries such a business could undercut Washington's efforts to pressure the North to give up its nuclear weapons.

Last month, North Korea demanded the removal of long-abandoned facilities at the mountain, saying that it plans to build its own international tourist zone in the area, a follow-up on North Korean leader Kim Jong-un's order to do so. The demand was seen as an expression of Kim's frustration amid limited prospects the project will resume anytime soon.

South Korea has pushed for talks and recently proposed sending a delegation comprised of government officials and relevant business people to the mountain to check facilities but the North has rejected those offers.

N. Koreans deported according to 'principles' and 'standards': official

N. Koreans deported according to 'principles' and 'standards': official