SEJONG/SEOUL, Nov. 14 (Yonhap) -- Hyundai Department Store submitted the only application for a license to operate a duty free shop in downtown Seoul on Thursday, the customs agency said.

The government closed bidding for a new license to run five duty free shops -- three in Seoul; one in Incheon, west of Seoul; and the other in the southwestern city of Gwangju, according to the Korea Customs Service.

Only Hyundai Department Store applied for a duty free outlet in Seoul. There were no applicants for licenses in Incheon and Gwangju.

Hyundai Department Store opened a duty free shop at its Trade Center branch in the affluent Gangnam district in 2018. It is seeking to open a new one at Doosan Tower in Dongdaemun, eastern Seoul, as Doosan Corp. has decided to shut down its duty free business there.

Earlier this month, Hyundai clinched a five-year deal to rent the duty free shop site from Doosan for 10 billion won (US$8.5 million) per year.

The duty free shop business is suffering an industry-wide slump, mainly because the number of Chinese tourists sharply fell amid a diplomatic row with Beijing over the installment of a U.S. missile defense system in South Korea.

But this year alone, Hanwha Group and Doosan Group decided to pull out of its duty-free business amid growing losses and heated competition. 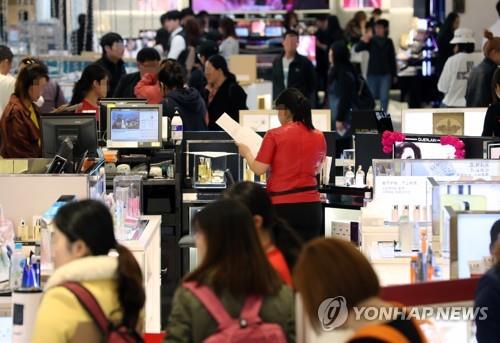