SEOUL, Nov. 15 (Yonhap) -- North Korea sent an ultimatum to South Korea earlier this week that it will unilaterally remove the South-built facilities from its Mount Kumgang resort unless Seoul tears them down on its own, Pyongyang's official news agency reported Friday.

The North's tough stance suggests little room for inter-Korean negotiations that South Korea has sought in an effort to keep the long-suspended tour project that was considered one of the most tangible symbols of inter-Korean reconciliation and cooperation.

"We sent an ultimatum on Nov. 11 that if the South Korean authorities stick to useless demands, we will regard it as meaning that they have given up their removal, and will unilaterally take stern steps to destruct the facilities," the Korean Central News Agency (KCNA) said.

"We will greatly develop Mount Kumgang into a global cultural and tourist area of our own style as its owner standing in front of our people and our next generations," KCNA said. "There is no room for South Korea to cut in."

KCNA said South Korea has stayed mum on the ultimatum.

Comment from Seoul's unification ministry was not immediately available.

Last month, North Korea demanded South Korea come and remove its resort facilities at Mount Kumgang on the North's scenic east coast, saying that it will build its own international tourist zone there.

South Korea has called for face-to-face talks to discuss the fate of the tour project to the mountain and proposed sending a delegation to check the facilities, but the North has rejected the offers. 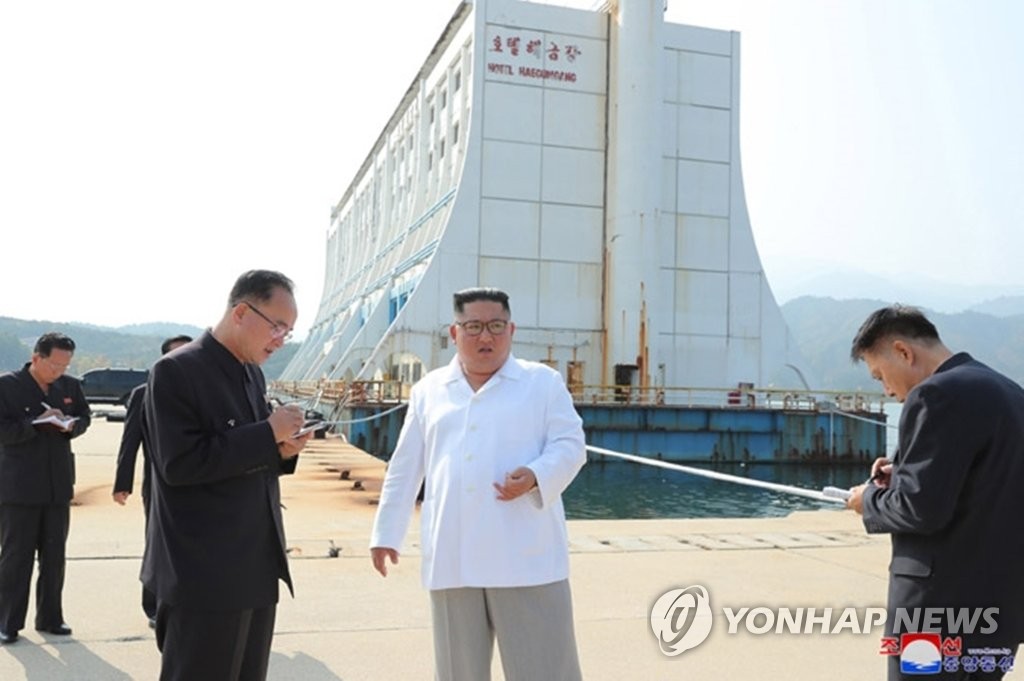 Launched in 1998, the tour program was regarded as a key symbol of inter-Korean reconciliation and economic cooperation. About 2 million tourists visited the mountain until it was suspended in 2008 when a South Korean tourist was shot to death by a North Korean solider.

South Korean President Moon Jae-in and North Korean leader Kim Jong-un agreed in September last year to normalize the tour program when conditions are met, but little progress has been made ever since due to global sanctions against the North.

Last month, Kim toured the mountain and ordered the removal of all "unpleasant-looking" South Korean facilities through an inter-Korean agreement and the construction of the North's own international tourist zone there. The order was seen as expression of his frustration over the protracted suspension of the joint tour program and intention to end it.

South Korea has said that it will consider "creative solutions" to the Mount Kumgang issue, saying that the mountain has served as not just a tourist destination but also as a venue for major non-political cross-border events such as the reunions of families separated by the 1950-53 Korean War.

South Korea has also hinted at allowing individual trips to Mount Kumgang if progress is made in talks with North Korea in guaranteeing the safety of its citizens.

KCNA denounced South Korea for belatedly seeking "creative solutions" and negotiations to address the fate of the tour project after wasting the past 10 years minding the United States. It said that North Korea is adamant in its plan to destroy the facilities and build its own in their stead.

"Having left the facilities at Mount Kumgang unattended for over 10 years for fear of the U.S., the South Korean authorities were caught off guard by our demand for their removal and are now imploring their participation in resuming the tours in a small corner of the mountain," KCNA said.

"At a time when a timetable has been set, we cannot waste time any more," it added. "The South Korean authorities must know that we have granted the last generosity in consideration of our relations of the past to let them remove its 'shabby' assets."