South Korean firms invested a total of US$5.26 billion in ASEAN countries last year, up 16.7 percent from a year earlier, according to the data from the Korea International Trade Association and the Export-Import Bank of Korea.

Seoul's direct investment in the region has been expanding at an annualized rate of 4.2 percent since posting $4.45 billion in 2010.

Last year's jump came as South Korean companies have been cranking up efforts to tap into the ASEAN market with growth potential and cheap labor.

Seoul is not alone in pushing to make forays into ASEAN. Japan and China have also been ramping up direct investments in the region.

Japan accounted for 12.4 percent of all foreign direct investment in ASEAN in 2018, up from 11.4 percent in 2015. The portion for China rose from 6 percent to 8 percent over the cited period, with that for South Korea increasing from 2.4 percent to 4.3 percent.

Despite the sharp rise in direct investment, South Korean exports to the 10-member bloc fell 2.1 percent on-year in the first nine months of this year amid a slump in its overall overseas shipments.

The decline contrasts with a 5.1 percent increase in 2018 and a 27.8 percent surge in 2017. South Korea's overall exports sank 9.8 percent on-year during the January-September period.

Exports to ASEAN accounted for 16.5 percent of Seoul's total overseas shipments in 2018, up from 11.6 percent in 2000, according to a report by the Korea Institute for Industrial Economics & Trade. 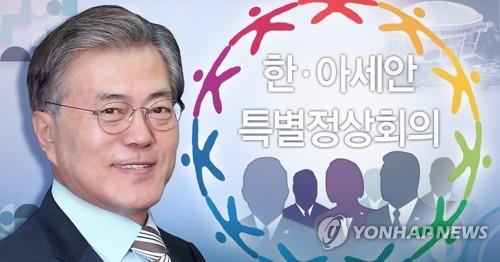 South Korea's trade surplus with the region expanded to $40.5 billion from $1.96 billion over the cited period.

ASEAN has also taken center stage in the Moon Jae-in administration's signature New Southern Policy, which aims to expand trade and diplomatic ties with the 10-member club and India.

In line with the initiative, Seoul has been redoubling efforts to strike bilateral or multilateral free trade deals with ASEAN countries.

In October, South Korea and Indonesia effectively reached the Comprehensive Economic Partnership Agreement (CEPA), which is equivalent to a free trade agreement but focuses on a broader scope of economic cooperation beyond trade.

The upcoming South Korea-ASEAN special summit, slated for Nov. 25-26 in the southeastern port city of Busan, is widely expected to help accelerate bilateral cooperation and ties.

Presiding over a Cabinet meeting at the Busan Exhibition and Convention Center on Tuesday, Moon stressed the summit should serve as an opportunity to dramatically strengthen bilateral cooperation for mutual growth in the future.
(END)