Under the globe-trotting concert tour, BTS staged 20 performances in 10 cities in North and South America, Europe, Japan, Saudi Arabia and finally in South Korea through May to October.

Through the tour, BTS sold a total of 976,283 tickets, averaging 48,814 ticket sales worth $5.8 million per concert, according to figures from Billboard Boxscore posted on the official Billboard website.

From the final four concerts at King Fahd International Stadium in Riyadh, Saudi Arabia, and Olympic Stadium in southern Seoul, BTS clinched $16.49 million sales, according to the data.

BTS topped the same chart in May after recording nearly $52 million sales through eight concerts in four North and South American cities, the data also showed.

Some other analyses put BTS' total sales from the world tour, including sales of merchandise and live streaming services, at as much as 200 billion won ($171.4 million). 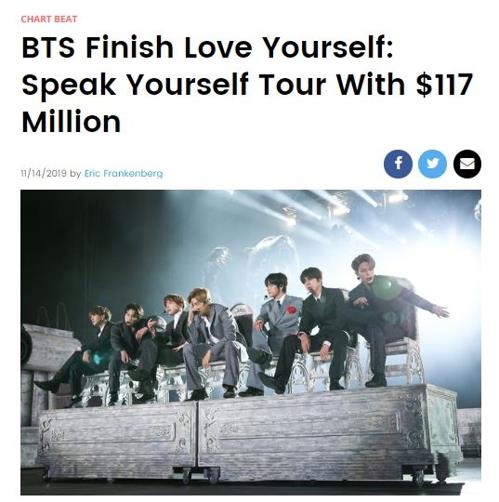 BTS records $116.6 mln in sales from 'Love Yourself: Speak Yourself' tour

BTS records $116.6 mln in sales from 'Love Yourself: Speak Yourself' tour