SEOUL, Nov. 16 (Yonhap) -- A group of South Korean activists staged a rally Saturday to protest against the United States' reported call for Seoul to sharply increase its share of the cost to maintain U.S. troops here.

The rally, organized and attended by some 50 civic groups, including the Korean Confederation of Trade Unions, was held near the Gwanghwamun area, where the U.S. Embassy is located.

Seoul put down about US$1 billion as part of the cost to maintain 28,500 U.S. forces in South Korea under its latest Special Measures Agreement (SMA) with Washington, which is set to expire at the end of the year.

Earlier reports said the U.S. has asked Seoul to more than quadruple its share of the cost to about $5 billion.

The allies are set to hold cost-sharing negotiations in Seoul next week.

The protesters urged the U.S. to withdraw any such demand, noting that 96 percent of respondents in a recent survey opposed any sharp rise in Seoul's share of the burden.

"The U.S. is conspicuously showing its true intention to pressure South Korea with the South Korea-U.S. military alliance while being indifferent to peace on the Korean Peninsula," they said.

Seoul has not officially confirmed the reports about the U.S. demand for an increase in its share of the defense cost, but said its future costs should be a "reasonable, equitable share within the existing framework." 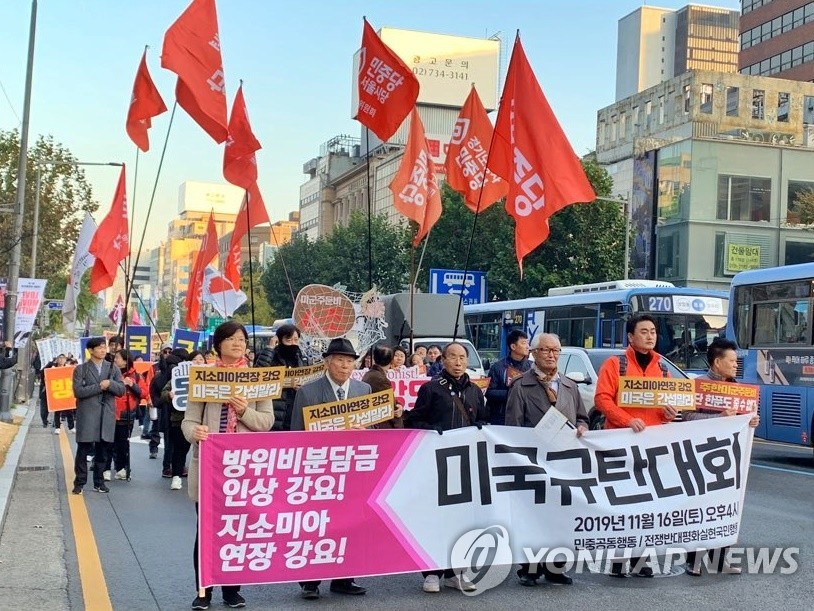