TOKYO, Nov. 16 (Yonhap) -- South Korea lost to Japan 10-8 on Saturday in the first of two matches between the long-time rivals at the Premier12 tournament.

The team combined for 26 hits at Tokyo Dome in the Japanese capital, and they'll be back at it on Sunday in the championship final of the World Baseball Softball Confederation (WBSC) competition.

The Premier12 doubles as an Olympic qualifying tournament for Asia/Oceania and America regions, and there was nothing at stake for South Korea and Japan on the Olympic front. South Korea clinched its spot at the 2020 Tokyo Olympics on Friday, while Japan has an automatic berth as the host country.

And before Saturday's game, the two countries were assured of the top two spots in the Super Round standings, which set up Sunday's championship final.

But whenever the two countries meet in baseball, or any other sport for that matter, no game is ever meaningless. And the full house of 44,224 fans at Tokyo Dome was buzzing well before the first pitch. 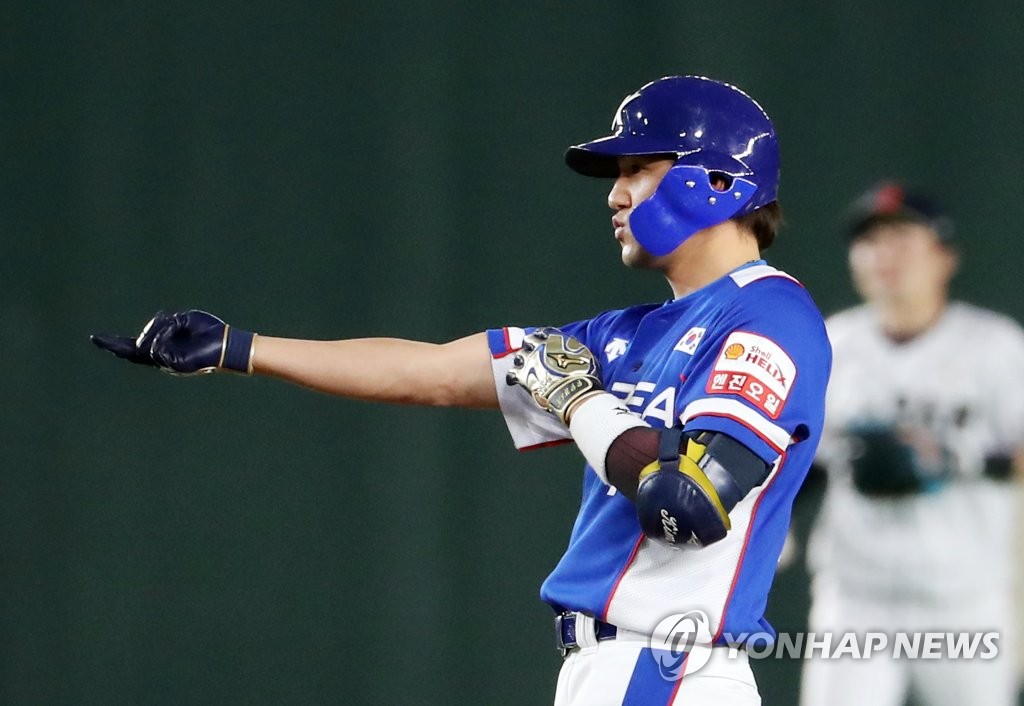 Japan scored the game's first run in the bottom second, with the bottom of its lineup coming through with key two-out hits.

With two men down, No. 8 hitter Tsubasa Aizawa hit a double down the left field line, as his sharp groundball went off the glove of diving third baseman Choi Jeong. And Ryosuke Kikuchi brought him home with a single through the hole on the left.

Hwang Jae-gyun knotted the score at 1-1 for South Korea with one swing of the bat in the top third, taking Takayuki Kishi over the left field wall for a solo home run.

But Japan put on an offensive clinic in the bottom third as it exploded for six runs to open up a 7-1 lead.

Japan had five consecutive hits against starter Lee Seung-ho, who was yanked after giving up two runs without retiring a batter. New pitcher Lee Yong-chan walked in a run, and gave up a single, a fielder's choice groundout and a sacrifice fly for three more Japanese runs. 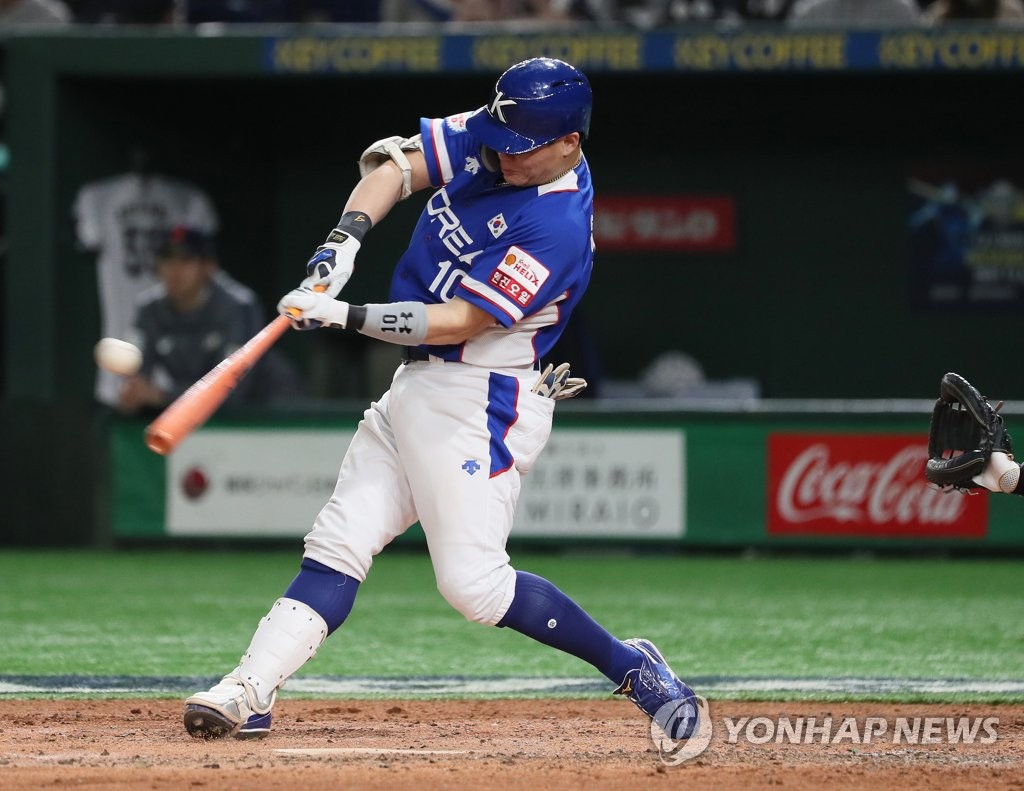 That 7-1 lead looked comfortable only for a few minutes, as South Korea returned the favor in the top of the fourth by scoring five runs on six hits against starter Takayuki Kishi.

South Korea opened the inning with three straight singles, the third being an RBI hit by Park Byung-ho. Two batters later, Kang Baek-ho's single brought South Korea to within 7-3. Then with two outs, Park Sei-hyeok and Kim Sang-su, the No. 8 and 9 hitters, smacked back-to-back doubles to make it a 7-6 game.

South Korea missed a golden opportunity to move ahead in the fifth, when it loaded the bases with nobody out.

Japanese reliever Yudai Ono walked three straight batters to start the fifth. But Choi Jeong struck out swinging on three pitches, and then on Kang Baek-ho's flyball, right fielder Seiya Suzuki made a fine running grab and gunned down Lee Jung-hoo at the plate to complete the inning-ending double play.

Japan gave itself some breathing room with two runs in the bottom fifth. Yamada's second double of the game -- on a fairly routine flyball that dropped in front of left fielder Kim Hyun-soo and bounced past to his right -- made it 8-6. Then Yoshihiro Maru drilled another double to the right side to give Japan a 9-6 advantage. 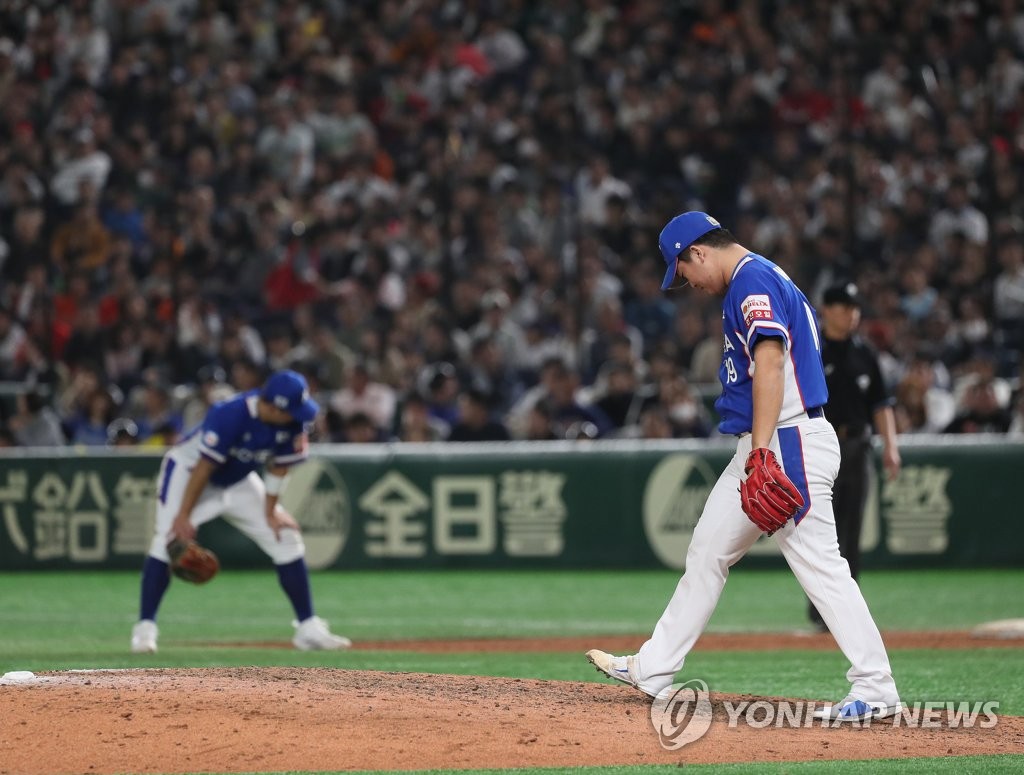 But South Korea refused to fold. In the top seventh, Kang Baek-ho delivered a two-out, two-run single to center to cut it to 9-8. Center fielder Yoshihiro Maru just missed on a diving catch on the sinking line drive and let the ball roll away from him.

Japan pulled away again in the bottom seventh by scoring a run without the benefit of a hit.

Reliever Go Woo-suk walked the bases loaded, and then hit Kensuke Kondo with a pitch to let in a run for a 10-8 Japan lead.

South Korea couldn't get any closer, with Ken Otake and Kazuto Taguchi shutting things down over the final two innings.