BANGKOK, Nov. 17 (Yonhap) -- The defense chiefs of South Korea and Japan held tense one-on-one talks in Thailand on Sunday, just days before the planned expiry of their intelligence-sharing pact, but no breakthrough was made.

Defense Minister Jeong Kyeong-doo said after the meeting with his Japanese counterpart, Taro Kono, that the two sides stuck to their existing positions on the issue of the General Security of Military Information Agreement (GSOMIA) set to expire Saturday.

"(The two sides) exchanged their original stances," Jeong told reporters after having 40-minute talks with Kono in the Thai capital of Bangkok on the sidelines of the 6th Association of Southeast Asian Nations (ASEAN) Defense Ministers' Meeting-Plus (ADMM-Plus).

"As I repeat, our government was to renew the pact until June. Following Japan's export curbs (on South Korea) saying their security trust was hurt, however, we were forced to have decided to terminate GSOMIA," Jeong said.

Sharing the need for the bilateral security cooperation, as well as trilateral coordination involving the United States, the two ministers agreed to work closer to strengthen their defense ties, Jeong added.

Noting what he said was the "very difficult" security situation in Northeast Asia following North Korea's missiles tests, among others, Kono told reporters after the meeting that he asked for South Korea's "wide response regarding GSOMIA."

When entering the meeting venue, a grim-faced Kono refused to answer reporters' questions about any new suggestions from the Japanese side and if he was optimistic about the fate of the agreement. 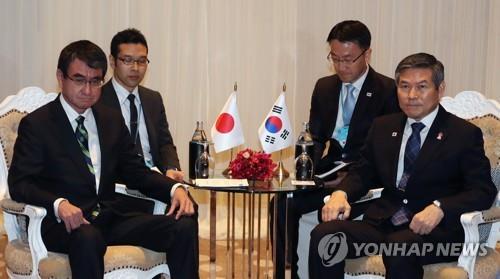 Later in the day, Jeong and Kono are scheduled to join U.S. Secretary of Defense Mark Esper for trilateral talks, according to the ministry. 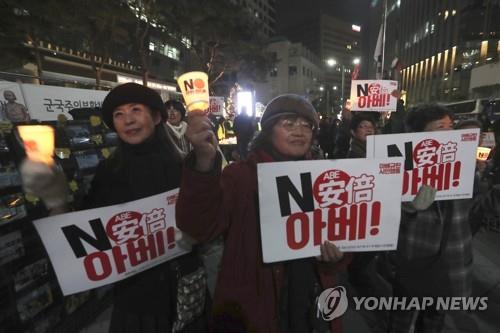