During the meeting, Defense Minister Jeong Kyeong-doo and his Chinese counterpart, Wei Fenghe, exchanged their assessments of regional security situations, commending each government's efforts for the denuclearization of and the establishment of a lasting peace on the Korean Peninsula, according to the ministry.

They also discussed key pending issues, including their push to set up more military hotlines, as well as Jeong's envisioned visit to China next year, through which the two sides seek to foster bilateral exchanges and cooperation in defense, it added.

Currently, the two sides have one such military communication channel between Seoul's master control and reporting center and China's northern theater command.

"The ministers shared the notion that their countries need to strengthen strategic communications for peace and stability of Northeast Asia," the ministry said in a release.

Sunday's meeting was held on the sidelines of the 6th Association of Southeast Asian Nations (ASEAN) Defense Ministers' Meeting-Plus (ADMM-Plus). The top defense officials from the two countries last met in Singapore in June.

Last month, the two countries held their first vice ministerial-level defense talks in five years, signaling a recovery of their bilateral ties, which had deteriorated since 2014 over Seoul's decision to host an advanced U.S. missile defense system.

In 2016, Seoul and Washington officially announced their plan to deploy a Terminal High-Altitude Area Defense (THAAD) battery to South Korea, leading to the suspension of defense exchanges until earlier this year. 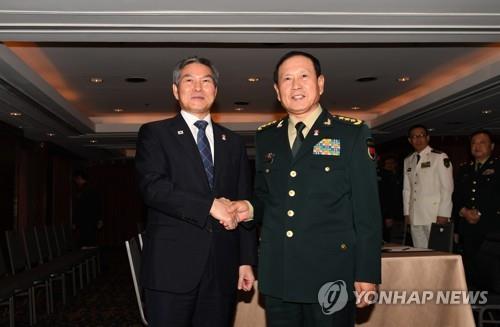