TOKYO, Nov. 18 (Yonhap) -- South Korea's run to the final at the Premier12 baseball tournament provided a glimpse into what the future holds for the national team.

The verdict: Baseball in South Korea is in good hands, despite the team's 5-3 loss to Japan in the title match Sunday. 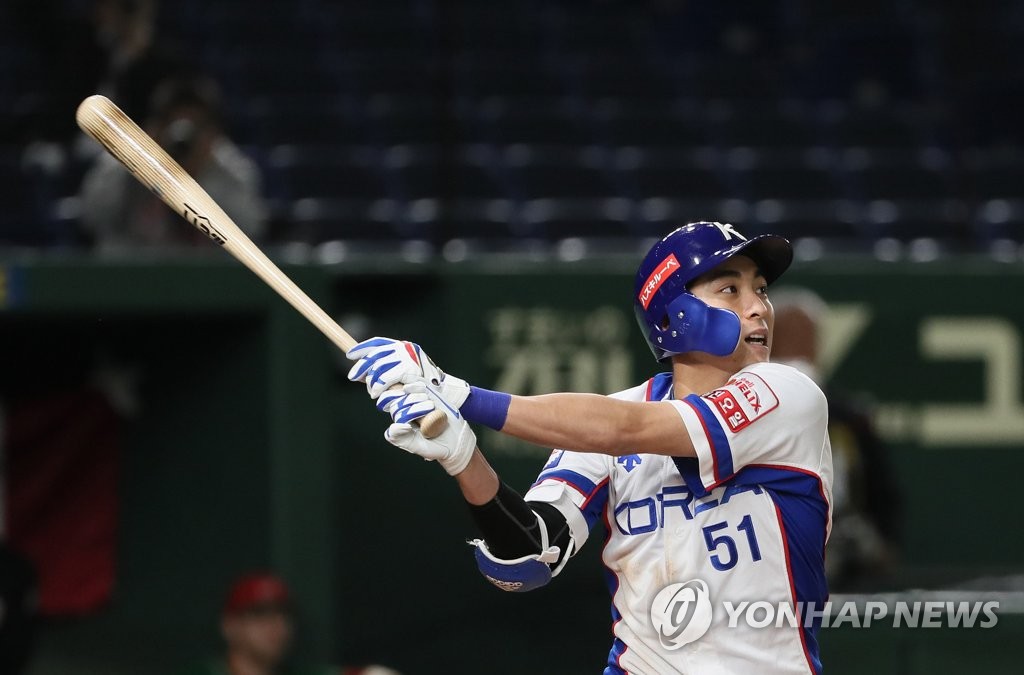 No youngster left a bigger mark than the 21-year-old outfielder Lee Jung-hoo. The hitting machine batted .385/.484/.577 in eight games and led the tournament with five doubles. He struck out just once in 31 plate appearances, that lone blemish coming in his final at-bat of the competition in the eighth inning Sunday.

Lee was held hitless for the first time at the Premier12 on Sunday, but it did little to take away from his impressive tournament.

Lee has put in three full seasons in the Korea Baseball Organization (KBO) with the Kiwoom Heroes. He's four more seasons from international free agency, by which time the Heroes can post him for interested Major League Baseball (MLB) clubs.

Lee said he hasn't yet started thinking about taking his talent overseas because he has more room to grow.

Lee turned heads in Japan during the Premier12 and may start drawing interest from Nippon Professional Baseball (NPB) clubs. He even has some personal connections with Japan, having been born in the country while his father, Lee Jong-beom, was playing in the NPB in 1998. But the young outfielder said the MLB would be his choice if he ever ends up playing outside South Korea.

Another hard-hitting outfielder, the 20-year-old Kang Baek-ho, made an impact in his lone start against Japan in the final Super Round game Saturday. 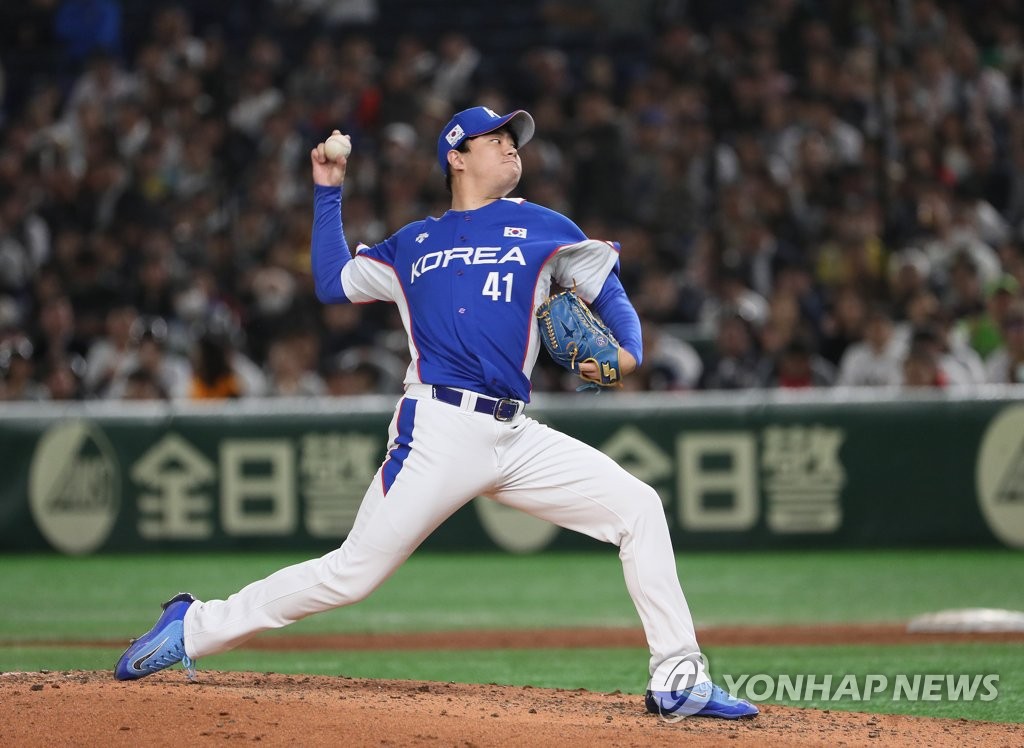 With manager Kim Kyung-moon resting his regulars and giving reserves a shot at playing at Tokyo Dome, Kang made his first international start. And he made most of the opportunity, going 2-for-4 with three RBIs.

On the mound, the 22-year-old right-hander Lee Young-ha served as the all-purpose reliever. He was one of the KBO's top starters for the Doosan Bears in 2019, going 17-4 with a 3.64 ERA. But Lee was just one year removed from being a reliever and manager Kim liked his ability to come out of the bullpen and eat up multiple innings as the situation dictates.

Lee tossed 2 2/3 shutout innings in Sunday's final, keeping South Korea in the game when it was down 4-3. Lee finished with a 1.08 ERA in 8 1/3 innings, more workload than any other South Korean reliever.

On the flip side, left-hander Lee Seung-ho, the team's youngest pitcher at 20, had an outing he'd rather forget last Saturday. In his first international start, Lee got roughed up for six earned runs on eight hits, including three doubles, in only two innings of work.

It was the rude, "Welcome to Tokyo Dome" moment for Lee, who did show promise as the first-time starter with the Heroes in the KBO this year.

Compared with this early-20s quartet, the 24-year-old shortstop Kim Ha-seong and the 25-year-old reliever Cho Sang-woo seem ancient. As the younger core continues to develop, Kim and Cho should head into their athletic prime years for the national team at next year's Olympics and beyond.

Kim Ha-seong jump-started South Korea's offense in the final with a two-run shot in the first inning and received the tournament's "Special Award" after batting .333 with a home run. He led South Korea with seven runs scored and tied for the team lead with six RBIs. 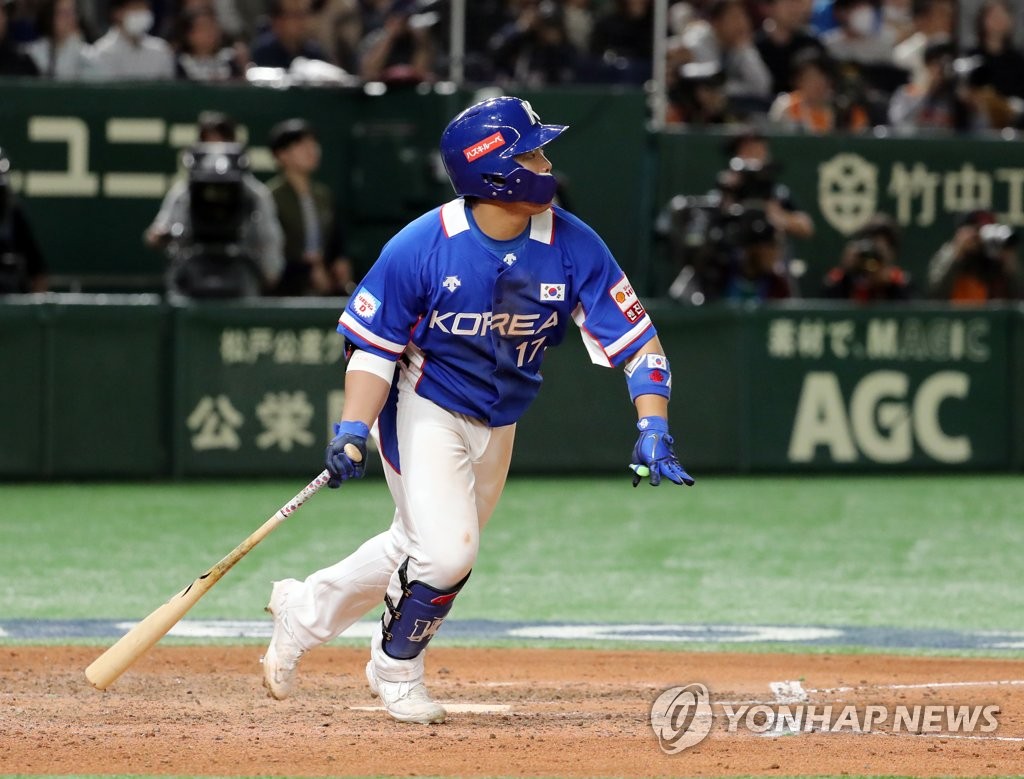 (Premier12) Bright future ahead for S. Korean baseball despite loss in final

(Premier12) Bright future ahead for S. Korean baseball despite loss in final