SEOUL, Nov. 21 (Yonhap) -- South Korea's central bank may soon be compelled again to step in and accommodate the country's sagging economy, but will likely sit out the rest of the year trying to see how much support, if any, its two rate reductions have given, analysts and observers here said Thursday.

The Bank of Korea (BOK) slashed the base interest rate by a quarter percentage point to 1.25 percent on Oct. 16, matching the all-time low that had once been seen in June 2016.

The latest rate cut marked the second of its kind in just over three months following the first rate cut in three years in July.

Still, the BOK's rate-setting board has come under pressure to further cut the policy rate amid heightened uncertainties. The BOK monetary policy board, headed by BOK Gov. Lee Ju-yeol, is scheduled to hold its eighth and final rate-setting meeting of the year next Friday.

"Externally, downside risks stemming from external risks, such as the U.S.-China trade dispute and Brexit, seem to be somewhat easing, but uncertainties will likely remain high until such risks are completely removed," Baek Yoon-min, an analyst at Kyobo Securities, said of the need for an additional rate cut.

South Korea's exports have dipped for 11 consecutive months since December, amid the unprecedentedly drawn-out trade dispute between the world's largest economies that are also the largest importers of South Korean products.

The drop in exports has clearly left a dent in the growth of the country's export-dependent economy, which expanded 1.9 percent from a year earlier in the first half of the year, far short of the 2.2 percent annual growth target set by the central bank in July.

The July growth estimate even came after two downward revisions -- to 2.6 percent at the start of the year and 2.5 percent in April -- from the 2.7 percent projected late last year.

The BOK has said earlier the U.S.-China trade dispute alone may have lowered South Korea's growth rate this year by 0.4 percentage point.

"It will take a considerable amount of time before any easing of external risks leads to actual improvements in our economic fundamentals," Baek noted.

"Considering that key international economic organizations, such as the International Monetary Fund (IMF), have recently revised down the country's growth outlook by a large margin and that the trough in the ongoing cycle may not be identified in the near future, we believe the call for an additional rate reduction will likely continue," he added.

While BOK chief Lee has highlighted the bank's possible need, as well as its capacity, to further slash the policy rate down the road, many doubt the board will do so next week.

"Although the (BOK) governor has highlighted the room for an additional monetary policy, he has also suggested the board will be much more deliberate about a third rate cut by noting that it will first observe the effects of the two base rate cuts," Shinyoung Securities analyst Cho Yong-gu said.

Cho noted the board may take a wait-and-see stance until as late as the second quarter of 2020.

"There exists a possibility (the latest rate cut) may reignite the argument about the effects and side effects of a rate reduction, as well as the real lower boundary for the country's base rate," Cho said.

South Korea's policy rate has been lower than that of the United States since March 2018, creating a constant threat of capital flight from Asia's fourth-largest economy. 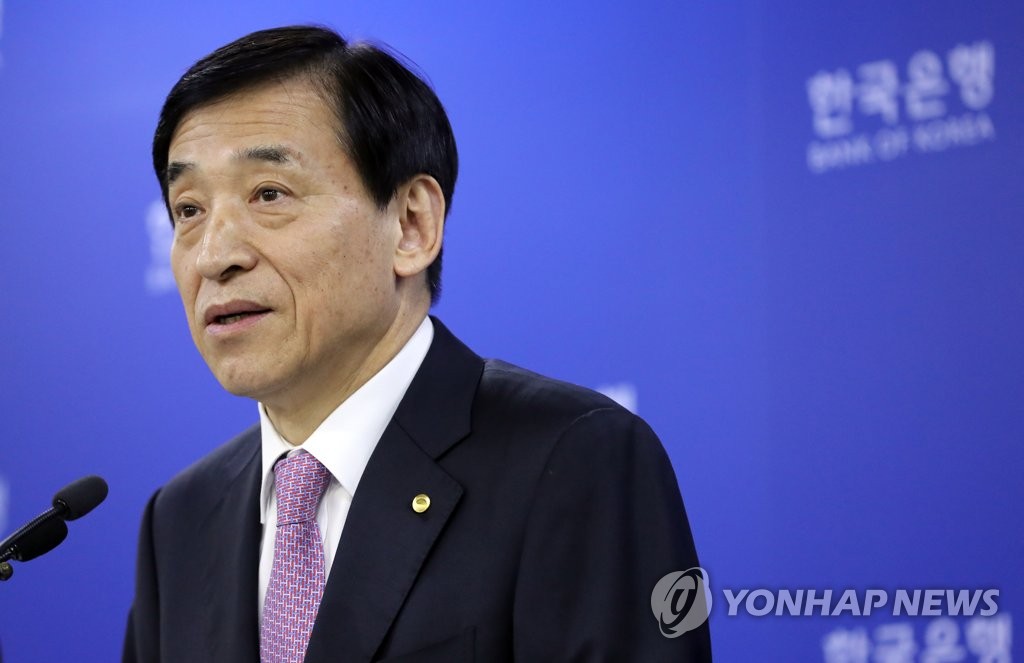 "I believe we still reserve policy room to take action when necessary. The BOK will maintain its easing stance while carefully monitoring the developments of major external factors and how they affect domestic prices and household debt," he said earlier.

An earlier report suggested South Korea's "real" base interest rate, based on inflation, may still be higher than that of the U.S. and other advanced economies.

In October, South Korea's core inflation, which excludes volatile food and energy prices, gained 0.6 percent from a year earlier, which brings down its actual base interest rate to 0.65 percent.

The United States' actual base rate, however, came to negative 0.675 percent in the same month as its inflation jumped 2.3 percent on-year while its base rate stood at an average 1.625 percent, according to the reports.

(News Focus) BOK to be on hold this time, but possible rate cut ahead

(News Focus) BOK to be on hold this time, but possible rate cut ahead