SEJONG, Nov. 18 (Yonhap) -- South Korea's chief negotiator left for Geneva on Monday for a second round of talks with Japan at the World Trade Organization (WTO) over the ongoing trade row over Tokyo's export restrictions.

Chung Hae-kwan, director-general of multilateral and legal affairs at the Ministry of Trade, Industry and Energy, is set to meet with his Japanese counterpart Junichiro Kuroda in the Swiss city on Tuesday.

The one-day talks are part of a dispute settlement process under rules of the WTO.

Chung said South Korea could push for the establishment of a panel at the WTO Dispute Settlement Body to look further into the case if the two sides fail to find common ground.

Last month, the two failed to reach an agreement in their first talks in Geneva in connection with Seoul's complaint with the global trade body over Tokyo's export curbs.

The talks came days after Japan approved the first shipment of liquid hydrogen fluoride to South Korea in an apparent attempt to make its case that its restrictions do not run counter to international trade norms under the World Trade Organization.

Chung said he does not think the Japanese approval has any big impact on the talks, noting the purpose of South Korea's complaint is to ensure that Japan can retract its export curbs.

"The problem is the restrictions themselves," Chung told reporters ahead of his departure at Incheon International Airport, west of Seoul. He said one or two Japanese approval of exports is not the main point of the WTO dispute. 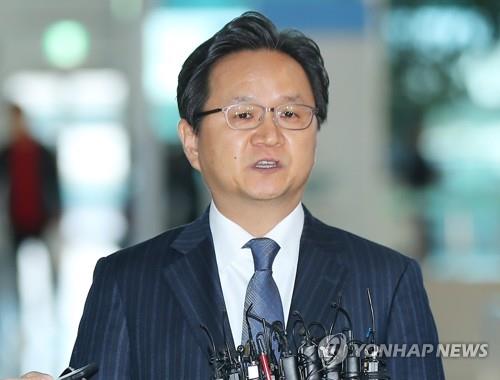 Chung also said the one-day talks have nothing to do with the bilateral intelligence-sharing pact.

On Sunday, South Korea and Japan failed to make progress over the fate of the General Security of Military Information Agreement (GSOMIA) that is set to expire Saturday.

Japan and the United States want to maintain the pact, but South Korea has said the pact only can be extended if Tokyo retracts its export curbs on Seoul.