BANGKOK, Nov. 18 (Yonhap) -- The United States has been pressuring both South Korea and Japan hard to narrow their differences so as to renew their soon-to-expire intelligence-sharing pact, but there are few signs of change in their stances in sight, Seoul's defense minister has said.

Defense Minister Jeong Kyeong-doo made the remarks during a press gaggle on Sunday in the Thai capital of Bangkok, after holding a one-on-one meeting with his Japanese counterpart, Taro Kono, and trilateral talks with Kono and the U.S. Secretary of Defense Mark Esper.

The talks were widely seen as a last chance for them to find a breakthrough, with just six days left to go before the planned expiry of the General Security of Military Information Agreement (GSOMIA).

"No cool answers were there (from Kono), though we've tried very hard," Jeong said when asked about any fresh suggestions from the Japanese side regarding the pact.

Japan wants to maintain the pact, but it has not budged an inch on the curbs. Tokyo reportedly made it clear to the U.S. recently that it would not retract its restrictions against Seoul for the sake of the renewal of the agreement.

"We remain just as far apart as ever, if you will," the minister said, adding that he also failed to put forth any new options.

"I hope such an unfortunate situation will not occur. But I don't see any specific changes as of now," he stated. The pact is to expire Saturday.

South Korea has maintained the position that any reconsideration of its termination decision would only be possible if Japan first changes its course.

Noting that there have been active negotiations behind the scenes between their diplomatic authorities, however, Minister Jeong voiced hope for a result from "such tremendous efforts."

As neither side has compromised on the issue, eyes have been on the U.S. for its mediating role.

"The U.S. has been strongly pressing both sides, not only South Korea but Japan, as maintaining a trilateral security cooperation mechanism is very important," Jeong said. "The U.S. has continued to deliver messages to Japan."

Amid Washington's repeated expression of displeasure over Seoul's decision publicly, experts have called on the three sides together to come up with "plausible causes" that the Seoul government can use to convince its people about a possible reversal of its decision.

Calling the decision regarding GSOMIA "inevitable," Cheong Wa Dae spokesperson Ko Min-jung said in a recent radio interview, "If we revoke our decision unilaterally without any change in Japan's exports restrictions or in relations between South Korea and Japan, it would only prove that we didn't make our original decision prudently enough."

During Sunday's meeting, Esper repeated the U.S. appeal to Seoul and Tokyo, according to Jeong, though he did not elaborate on what solutions, if any, the U.S. suggested.

In his opening remarks of the trilateral meeting, Esper urged his two Asian allies to overcome bilateral issues that harm the efforts of the three countries and "play into the hands of Pyongyang and Beijing." 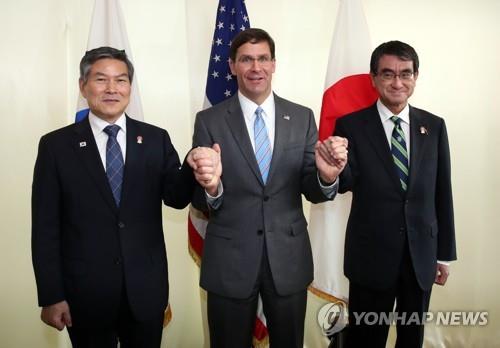 Speaking of the allies' decision to postpone their combined air exercises, the minister reiterated the importance of "supporting diplomatic efforts to prevent North Korea from derailing from the denuclearization track."

Jeong and Esper held an impromptu press conference in Bangkok on Sunday and announced their decision to postpone the wintertime air exercises, which were to be staged starting Monday.

"We hold a commanding lead (over North Korea) in terms of levels of trainings and weapons systems, and we are at a very critical juncture now in terms of diplomacy," Jeong said.

Noting that most of the combined drills between South Korea and the U.S. planned for this year have already been completed, the minister said he does not see problems in defense terms, which could be caused by the suspension of the air exercises.

"The postponement means that we can do them anytime," he said.

On Sunday, the Pentagon chief also said the decision was an act of goodwill for diplomacy and peace, not a concession, calling on the North to demonstrate the same goodwill and return to the negotiating table "without precondition or hesitation."

Efforts are under way to move the stalled denuclearization negotiations between Washington and Pyongyang forward, though little tangible progress has been made since the breakdown of the summit between their leaders in February.