SEOUL, Nov. 18 (Yonhap) -- South Korea will announce a strategy to build up its artificial intelligence (AI) capability this year as part of its broader effort to achieve sustainable growth, the country's science minister said Monday.

In a meeting with reporters in Seoul, Choi Ki-young said that while the country's AI sector is currently trailing global leaders, the country's advanced infrastructure in information and communication technology (ICT) should allow it catch up rapidly going forward.

The top policymaker for science and ICT said that the core plan being drawn up centers on injecting some 2 trillion won (US$1.7 billion) into research and development (R&D) in the next 10 years and concerted effort to train skilled AI engineers.

AI is considered a key part of the fourth industrial revolution that Seoul wants to play a major role in. The revolution refers to a highly connected digital economy that makes use of such emerging technologies as AI and big data to fuel innovative economic growth.

He said that along with AI, South Korea will spare no efforts to further expand 5G. South Korea was the first country in the world to launch full-fledged commercial 5G services on April 3.

On the need to strengthen the country's components and industrial materials industries, Choi said the government is committed to pouring 5 trillion won into related R&D up till 2022, with support being given to smart chips, future mobility, quantum technology, biotech and laying the foundation for a hydrogen economy. 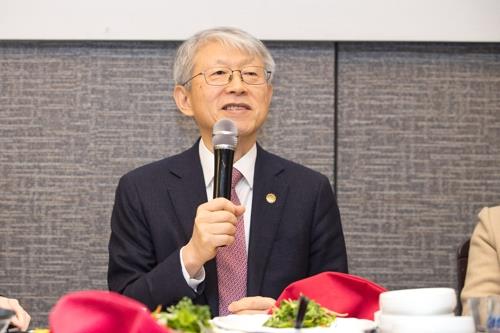