BANGKOK, Nov. 19 (Yonhap) -- The defense ministers of South Korea and Japan huddled together behind the scenes in Bangkok this week, spurring speculation that the two countries are making last-ditch efforts to save their soon-to-expire military intelligence-sharing pact.

On the sidelines of the conference, Jeong and Kono held tense one-on-one talks and then joined their U.S. counterpart, Defense Secretary Mark Esper, in a trilateral meeting Sunday, but no breakthrough was made on the GSOMIA issue as the two sides stuck to their existing positions.

But behind the scenes, Jeong and Kono appeared to have continued to seek a breakthrough. 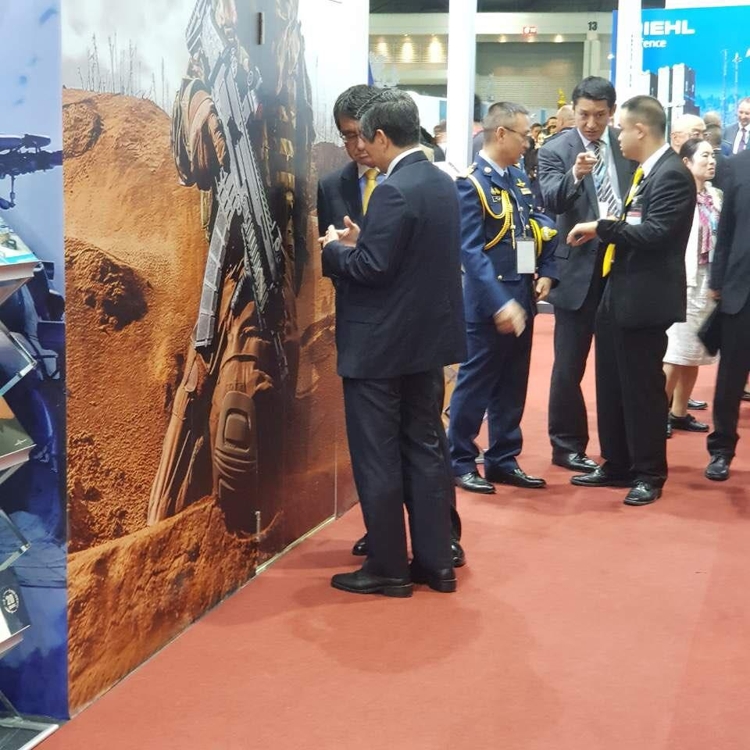 During the banquet of the 6th ASEAN Defense Ministers' Meeting-Plus (ADMM-Plus) on Monday, Jeong and Kono were seen having a brief conversation. After wrapping up the official schedule of the multilateral event, they then left the venue and met again at another place, according to sources.

Earlier, the two were also captured having a talk while attending a defense exhibition in Bangkok.

It was not known what the two ministers discussed during their unofficial gatherings and whether they were able to find solutions, if any.

GSOMIA is set to expire at midnight Friday, three months after Seoul decided to terminate it after Japan imposed export restrictions against the South in apparent retaliation for South Korean Supreme Court rulings on wartime forced labor.

The U.S. has called strongly for GSOMIA's renewal as it sees the pact as a key mechanism of trilateral security cooperation with the two Asian allies in a region marked by an increasingly assertive China and a nuclear-armed North Korea.

But neither side budged an inch, and the U.S. also appeared to have failed to present options that could satisfy both sides, further heightening chances of letting go of the pact.

"No cool answers were there (from Kono), though we've tried very hard," Jeong told reporters following the bilateral meeting Sunday when asked if Japan made any fresh suggestions regarding the pact, adding, "I also failed to do so."

"I hope such an unfortunate situation (of the expiry) will not occur. But I don't see any specific changes as of now," Jeong stated.

South Korea has maintained the position that any reconsideration of its termination decision would only be possible if Japan retracts its export restrictions against Seoul, as the very measures forced South Korea to opt to end the military pact.

Imposing export curbs on South Korea, Japan cited a lack of trust as a reason. Seoul, in response, said exchanging sensitive military information with an untrustworthy partner is not possible.

Japan has called on South Korea to reverse its decision, citing grave regional security situations caused by North Korea that has fired missiles in succession in recent months. But Tokyo reportedly made it clear to the U.S. recently that it would not retract the export curbs against Seoul for the sake of the renewal of the agreement. 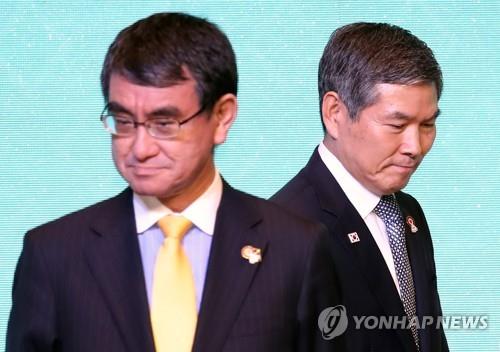 According to a survey of 501 South Koreans conducted Friday, 55.4 percent said the Seoul government should maintain its decision, up 7.1 percentage points from the result of a similar survey tallied on Nov. 6. The portion in favor of its renewal was 33.2 percent, down from 37.6 percent earlier this month.

In a similar poll conducted by the East Asia Institute on Nov. 4 involving 1,000 citizens, 60.3 percent voiced their support for the government's decision, while 18.9 percent opposed its termination.

"If we revoke our decision unilaterally without any change between South Korea and Japan, it would only prove that we did not make our original decision prudently enough," Cheong Wa Dae spokesperson Ko Min-jung said in a recent radio interview.

President Moon Jae-in is scheduled to have a town hall meeting with 300 citizens Tuesday to listen to their voices on diverse pending issues, according to his office.

In Japan, media portrayed the situation negatively following the Bangkok meetings, saying that Tokyo appears to see its expiry as inevitable.

During a press conference Monday, Chief Cabinet Secretary Yoshihide Suga appeared to have tried to play down the value of the defense pact, saying that GSOMIA is just complementary to its intelligence gathering together with the U.S.

With few options in sight, Seoul's Foreign Minister Kang Kyung-wha is known to be mulling attending the two-day event that will kick off Friday in the Japanese city of Nagoya.

Her attendance could lead to her meeting with Japan's top diplomat, Toshimitsu Motegi, which could be a last-minute, bilateral showdown before the pact is doomed to be terminated.

"There seems to exist more room to resolve the issue in the diplomatic realm than in terms of defense. ... (Seoul and Tokyo) have made tremendous efforts diplomatically, so we need to wait for the results from such tremendous efforts a little longer," Minister Jeong said. 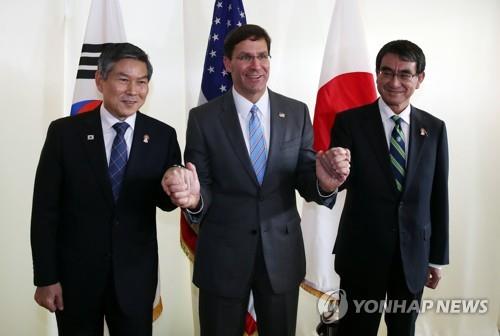