The upgraded Grandeur, which went on sale Tuesday, comes in four versions with a 2.5-liter gasoline, a 3.3 gasoline, a 2.4 gasoline hybrid or a 3.0 liquefied petroleum injected engine, the company said in a statement.

"The company has drastically changed the design of the new Grandeur and added cutting-edge safety features to satisfy the changing appetite of customers in their 30s and 40s," Hyundai Motor Executive Vice President Chang Jae-hoon said in a press briefing on the latest model.

The Hyundai flagship sedan sells at the starting price of 33 million won (US$28,000), with the price going up to 37 million won depending on options, it said.

In the past 11 days through Monday, Hyundai said it had received 32,179 preorders for the wider and longer flagship sedan.

Hyundai applied the FCA-JT technology for the first time to the upgraded Grandeur. It helps prevent collisions with vehicles that come in front when turning left at intersections.

Hyundai also adopted its "Sensuous Sportiness" design for the face-lifted model of the sixth-generation Grandeur that was launched in November 2016.

Sensuous Sportiness is defined by the harmony between four fundamental elements in vehicle design: proportion, architecture, styling and technology. 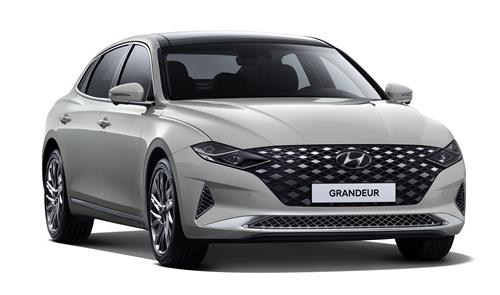