SEOUL, Nov. 19 (Yonhap) -- Union workers of a bus company in Goyang, west of Seoul, went on strike Tuesday after wage talks with management broke down.

Myungsung Transportation's more than 270 buses on 20 lines, including those linking Seoul and the satellite city in Gyeonggi Province, stopped operations.

The union and management failed to narrow their differences in an arbitration session presided over by the local labor authorities Monday and an additional meeting between the two sides earlier Tuesday.

The company, which owns about 340 buses and hires some 560 drivers, rejected the union's demand for wage hikes and compensation for reduced salaries stemming from a new shorter workweek system introduced nationwide last year.

The union declared the start of the walkout at 4:15 a.m. Tuesday.

The government deployed 20 chartered buses on a route to Seoul beginning at 6 a.m. It notified citizens of the strike through the internet, mobile messages and street banners, advising them to use alternative means to get to work.

About 80,000 citizens are estimated to use buses in the city.

"I left home 40 minutes earlier than usual because subway trains may be overcrowded with passengers on the news of the bus strike," said Huh Seung-ho, 48, a Goyang resident who commutes to Seoul.

"I hope the strike won't be prolonged at a time when the weather gets colder," he added.

Commuters' difficulties were aggravated by the chilly weather. The morning temperature in the city fell to minus 4.5 C Tuesday, the lowest of the season. The state weather agency issued a cold wave advisory the previous night. 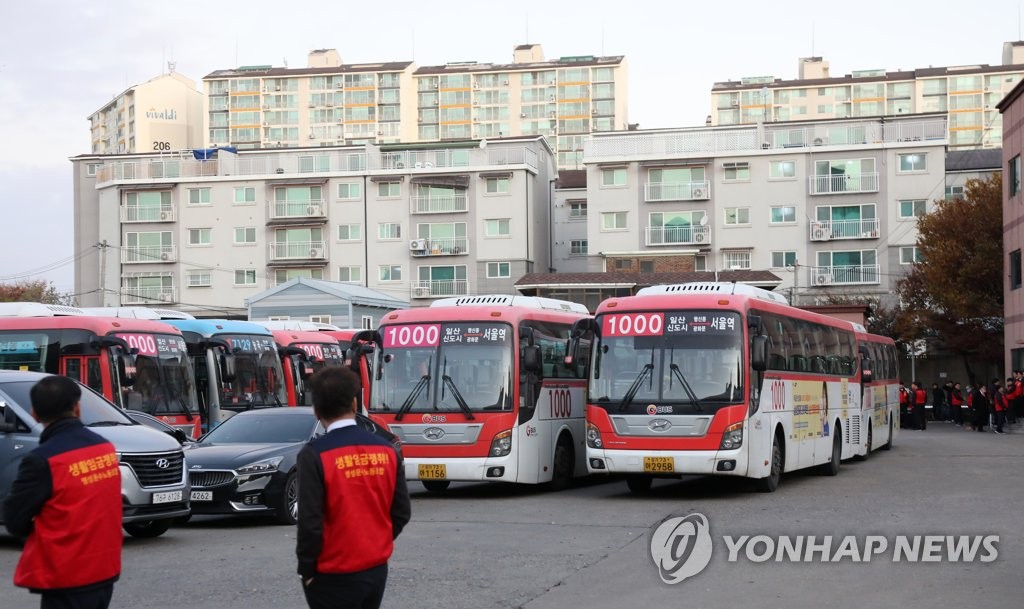