SEOUL, Nov. 19 (Yonhap) -- South Korea's economic growth would get a boost from the implementation of a mega trade deal involving Asia-Pacific countries, a report said Tuesday.

But India, Asia's third-largest economy, did not join the deal that would create a mega economic bloc that accounts for half of the global population and one-third of the world's gross domestic product.

India's participation will be decided before the deal's formal signing slated for 2020.

"The implementation of the regional trade agreement would add 0.41-0.62 percent to South Korea's economic growth over a 10-year period by reducing tariffs," said the report by the Korea Institute for International Economic Policy (KIEP). 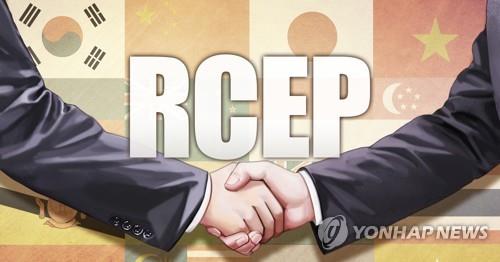 South Korean consumers are thus expected to enjoy up to US$6.8 billion in benefits from the RCEP implementation over the cited period.

"The estimated economic benefits are based only on tariff reductions, but the RCEP's overall impact on the South Korean economy would be greater should eased non-tariff barriers be taken into account," the report said.

The RCEP is also likely to spur export-driven South Korea to sign a free trade agreement (FTA) with Japan and help Seoul upgrade its FTA with ASEAN member states, which is comprised of Brunei, Cambodia, Indonesia, Laos, Malaysia, Myanmar, the Philippines, Thailand, Singapore and Vietnam, it added.

The report pointed out that India's participation in the RCEP is crucial to ensuring its sustainability as a pioneering mega trade deal and expanding its influence.

"To that end, it is important to keep stressing that China should play a role in coaxing India into the mega trade agreement," it said.

The China-led RCEP is widely seen as a threat to the Trump administration's Indo-Pacific strategy, which aims to counter Beijing's military and economic rise in the region.
(END)

S. Korea would get economic boost from RCEP: report

S. Korea would get economic boost from RCEP: report