SEOUL, Nov. 19 (Yonhap) -- The top U.S. envoy in South Korea said Tuesday that Seoul has elevated its long-simmering historical conflict with Tokyo into the security realm, redoubling calls for it to reverse the decision to end its military information-sharing accord with Japan.

Amb. Harry Harris made the remarks, warning that the termination of the General Security of Military Information Agreement (GSOMIA) would affect America's ability to defend South Korea, which is "our treaty obligation to your country."

The military pact, which the U.S. sees as a symbolic yet crucial tool to promote trilateral security cooperation with its two Asian allies, is set to expire on Saturday unless Seoul reverses its decision to terminate it.

"Korea elevated it into the security realm and that security realm affects us. So, now it affects the U.S. and our ability to defend Korea, and puts our troops at risk ... so that is why we reacted quickly and strongly in expressing disappointment at Seoul's decision," he said in an exclusive interview with Yonhap News Agency. 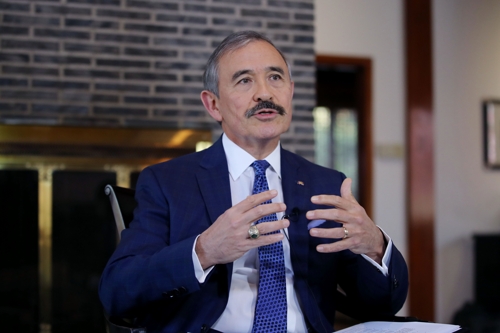 Asked if the GSOMIA termination would affect the South Korea-U.S. alliance, the ambassador recalled the State Department's earlier statement that it would make defending the peninsula "more complex."

"We fully support, the United States fully supports, the ROK-Japan GSOMIA and we certainly hope strongly that both countries can overcome their disagreements," he said. ROK stands for South Korea's official name, Republic of Korea.

In August, Seoul announced the decision in response to Tokyo's export restrictions, which it sees as political retaliation for last year's Korean Supreme Court rulings that ordered Japanese firms to compensate victims of forced labor during Japan's 1910-45 colonization of the Korean Peninsula.

Seoul insists that it can reconsider its decision on GSOMIA only if Tokyo cancels the export control measures. Japan imposed the restrictions citing security concerns and an erosion of trust with South Korea.

Commenting on Seoul's rationale for the decision to end GSOMIA, Harris expressed his disagreement with it.

"Just because I understand cognitively the rationale behind Korea's decision, that does not mean I agree with it. I don't agree with it," he said.

Though there are no signs of progress in the efforts by Seoul and Tokyo to settle their dispute, Harris said that he believes there is a chance that South Korea could reverse its decision on the military pact.

"I do believe there is a chance ... There is always a chance and we have a few days left and we will have to see where it goes," he said.

The ambassador also underscored a "clear military value" to GSOMIA despite claims that the military pact only carries "symbolic importance."

"As it exists, Japan and Korea can coordinate directly with each other to share military information. They don't have to go through a middleman, the U.S.," he said.

Touching on the hitherto unfruitful defense cost-sharing negotiations between Seoul and Washington, Harris urged Seoul to put forward a "meaningful counter-offer" to make progress, stressing that "the ball is in Korea's court."

He added that the two sides could conclude their negotiations over the sharing of the cost for stationing the 28,500-strong U.S. Forces Korea before the end of the year.

"Of course it is possible and it is not a theoretical possibility. It is a very real possibility. But Korea has to come back to the negotiating table in good faith," he said.

Earlier in the day, the allies cut short their latest round of negotiations on the Special Measures Agreement (SMA), a defense cost-sharing accord, amid Washington's demand for a hefty rise in Seoul's payments.

Reports said the U.S. has demanded South Korea pay nearly US$5 billion next year to cover expenditures related to the allies' combined military exercises and support for the USFK troops' families.

Harris pointed out that there has been "misreporting and misperceptions" in news reports.

"We are not seeking, we are not asking for Korea to defray the cost of the strategic assets to the peninsula, for example, or to pay for things that are ongoing outside the Korean theater of operations and that has been reported in some parts of the press," he said. "That is simply not true."