SEOUL, Nov. 19 (Yonhap) -- President Moon Jae-in said Tuesday his government will try "till the last moment" to avoid the termination of an accord with Japan on exchanging military information but he made clear that depends on Tokyo's stance on its export restriction against Seoul.

Although the agreement, known as GSOMIA, is scheduled to come to an end this weekend, South Korea will maintain partnerships with Japan on regional security, he added.

U.S. officials have voiced worries about potential negative impact on teamwork in Northeast Asia security, primarily against Pyongyang and Beijing.

Moon pointed out that Japan's export controls against South Korea are behind Seoul's decision to ditch GSOMIA.

South Korea is providing Japan with a big help in its national security, serving as a "breakwater," thus enabling Tokyo to save defense spending, the president noted.

However, Japan toughened export restrictions, citing concern about strategic materials being transferred to North Korea or other third countries.

"Isn't it contradictory to seek the sharing of military information while saying South Korea is not trustworthy in terms of security?" Moon said. "We took measures that we naturally had to take."

If Japan changes tack and seeks to resolve the issue of export control and GSOMIA, he added, South Korea is willing to work together with it.

On the Korea peace process, Moon said his initiative to improve inter-Korean ties is going relatively slow since it's tied with progress in Washington-Pyongyang dialogue on denuclearization.

As they stated, the two sides are trying to arrange a third summit via working-level talks within this year, he said.

"If a third North Korea-U.S. summit is realized, I think there would be an accomplishment, certainly," Moon added. "If so, there will be far more room for inter-Korean ties (to improve)." 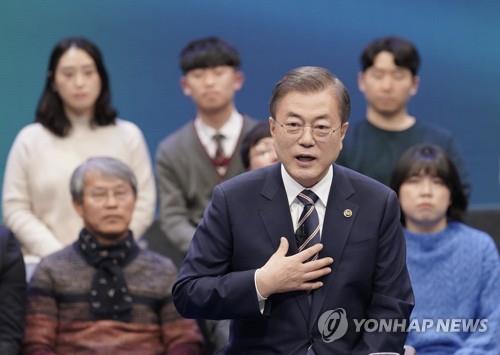 Meanwhile, Moon again apologized to the people for having caused huge social conflicts and rifts with the appointment of his political ally Cho Kuk as justice minister. Cho stepped down in disgrace last month after weeks of street protests for and against his appointment. His family has been under investigation by the prosecution over allegations of document forgery and financial problems.

Moon emphasized the importance of prosecution reform in spite of Cho's resignation.

In particular, he said it's crucial to establish a non-prosecution unit specialized in looking into corruption by high-ranking public servants.

Regarding a proposal to introduce a voluntary military system to replace the existing compulsory one, the president said it's realistically premature to do so and it's an issue to be considered over the mid-to-long term.

Asked about soaring housing prices, especially in Seoul, he reaffirmed that his administration won't use the real estate market to stimulate the economy and artificially raise growth rates.

"We will bring housing prices under control by mobilizing various stronger measures if the current ones don't work," he said.

On gay marriage, he said more discussions are necessary to reach a social consensus for related legislation.

Moon had the national conversation with the people as he has entered the latter half of his single five-year presidency. A total of 300 people were invited to the 117-minute event moderated by Bae Chul-soo, a popular radio host.