SEOUL, Nov. 20 (Yonhap) -- A unique style of traditional Korean heating system has been found beneath a 19th century pavilion in the Gyeongbok royal palace in central Seoul, the national heritage agency said Wednesday.

The Cultural Heritage Administration unveiled the result of its recent excavation and investigation of Hyangwonjeong Pavilion located on an artificial islet in the middle of a pond on the grounds of the Joseon Dynasty (1392-1910) palace.

Researchers had thought the traditional heating system, called "ondol," was installed in the two-tier hexagonal pavilion, given the building has a furnace, or "agungi," the source of heat in an ondol system. But details of the structure had not been known.

The excavation, which started in September, found evidence of an ondol system -- the remains of an underfloor horizontal flue and furrows, which were used to send warm air and smoke from the fire through the room, the agency said. Another key component, called "gudeul," a flat, thin stone covering the flue, was not discovered. 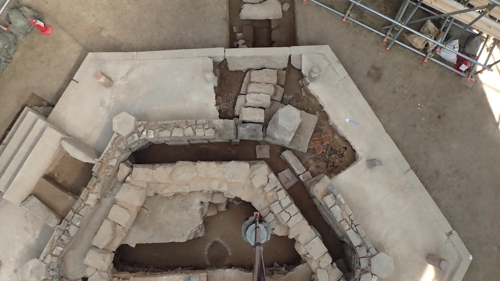 Ondol has rarely been found in pavilions, and the Hyangwonjeong Pavilion system has a unique structure. Its flue and furrows are on the margins of the hexagonal room, while the passageways of heat and smoke in an ordinary ondol system spread to cover the whole space.

"It is said that skating events were held on the pond during King Gojong's rein (1863-1907). The donut-style ondol may have been intended to warm people who used to look out of the window on such occasions," an official of the Cultural Heritage Administration said.

The design of the flue also indicates smoke may have emitted not through a chimney but naturally through the flue itself, the official added.

Hyangwonjeong, meaning "pavilion of far-reaching fragrance," is registered Treasure No. 1761. It was built around 1870, nearly 500 years after the Gyeongbok Palace was constructed in 1395 in the early Joseon Dynasty.

The heritage body decided in 2017 to dismantle and restore the cultural property after it found that the structure was tilting and some wooden joints were loose. The probe found that cracks on one of the foundation stones caused it to lean.

The agency plans to restore the pavilion, including the ondol system, and reopen it to the public next July. The project is being conducted by the agency's Royal Palaces and Tombs Center and Ganghwa Research Institute of Cultural Heritage. 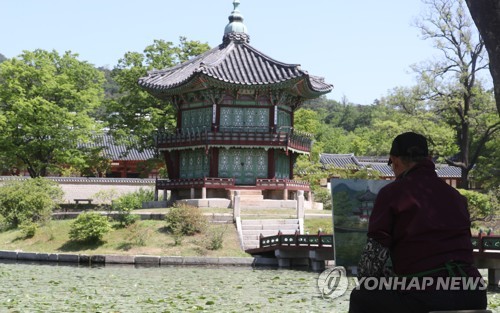