SEOUL, Nov. 21 (Yonhap) -- Lee Eun-hee, an office worker living in Seoul, subscribes to the YouTube channel of South Korean golfer Ko Jin-young, the 2018 Rookie of the Year and the current World No. 1 in the LPGA tour.

"Ko Jin Young Ko Jin Young Ko," the player's YouTube channel, shows the professional golfer's daily life between tournaments in the United States and Canada. The first video, posted in September, is about her daytrip to Niagara Falls in August while visiting Ontario for the CP Women's Open, which she won. 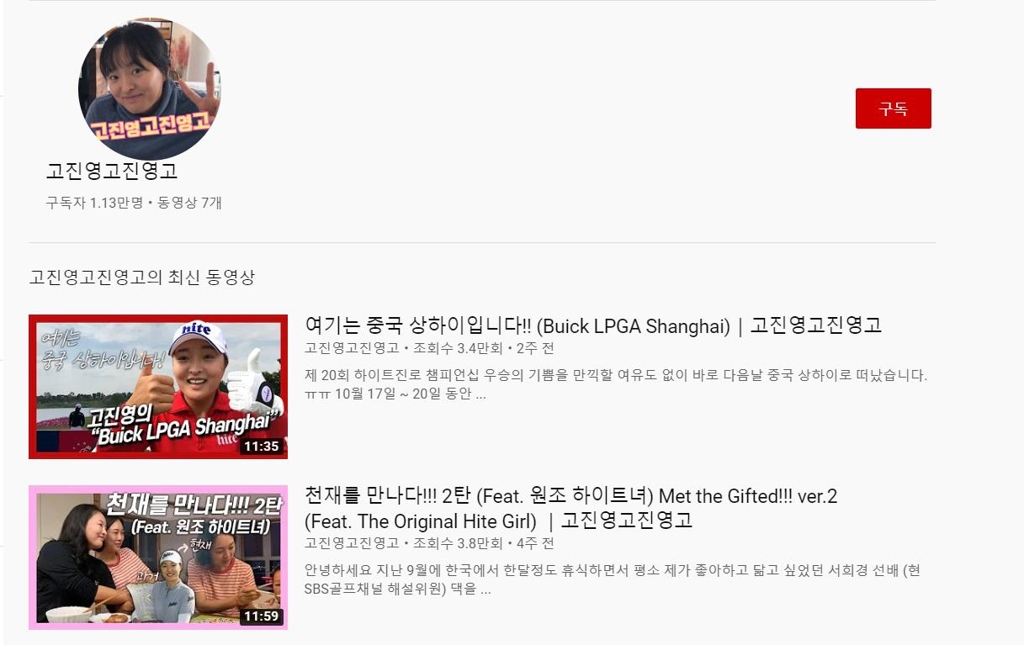 "It's not that entertaining or funny, compared to those of other famous YouTube creators," said Lee, who enjoys golf every weekend. "She's not skilled in making the videos, but it's worth watching."

She said it is interesting to see how the world-class athlete spends her downtime or whether she really eats street food and snacks instead of consuming a well-balanced diet.

In a recent media interview, Ko said she started the YouTube channel to ease the loneliness that she has suffered in the United States since her LPGA debut in 2018. The channel, whose videos are shot and edited by Ko, has more than 11,000 subscribers.

But Ko is not the only South Korean celebrity in the sports and entertainment worlds to have her own presence on YouTube.

Popular actor Gang Dong-won's YouTube channel, MonoTube, was the talk of the town when he released his first six videos one by one in May. His first video -- of a trip to Los Angeles with friends -- attracted more than 2 million views, as it was a rare chance to see the reclusive actor in the mass media. 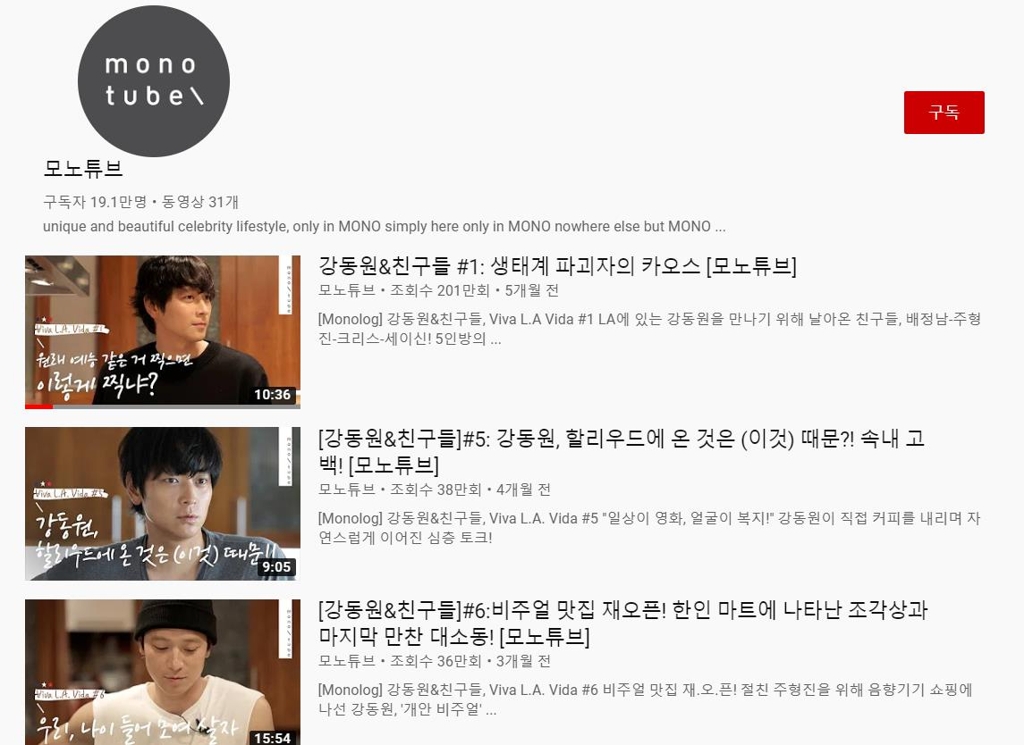 Actress Shin Se-kyung also uses YouTube to reveal scenes of her daily life like cooking and hanging out with friends, and she has over 700,000 subscribers. Actresses Lee Ha-nee and Han Ye-seul and actor Ji Chang-wook are just few further examples of celebrities who run YouTube channels and share everyday stories with fans.

Experts said YouTube is a new platform that helps these stars enjoy their fame and gives them a chance to present another side of themselves.

"YouTube is a useful tool for fans to discover the unknown charms of their idols and stars through their daily lives," columnist Park Hee-ah said in a report published by the Korea Creative Content Agency (KOCCA). "It also helps narrow the psychological distance between celebrities and fans."

Through YouTube, celebrities can keep in touch with their fans even during fallow periods.

Gang, who is set to make his Hollywood debut with the upcoming "Tsunami LA," opened his YouTube channel in an apparent bid to remain popular in South Korea while he stays in the U.S. for about a year to work on the movie.

Above all, the expert noted that the media mainstream has experienced a seismic shift to YouTube and other online platforms from conventional TV.

A few years ago, star producers of major broadcasters like KBS and MBC transferred to cable TV channels for a massive amount of money. Nowadays, however, YouTube is a magnet for talented content creators, producers and even big-name TV stars.

Young people who are more used to smartphones hardly watch conventional programs as they don't like to sit in front of the TV, tuned in to a certain station at a specific time. They prefer to flick through YouTube, looking for easy-to-consume web content.

According to a survey by the Korea Press Foundation, about 40 percent of South Koreans watch the news on YouTube at least once a week, far higher than the average of 26 percent in 38 countries including Denmark, Britain and the Netherlands.

Broadcasters and production houses have jumped into the emerging profitable business, and a growing number of companies are looking for YouTube influencers for their business marketing. As a result, the YouTube world is getting bigger and bigger.

"Those who want to tell and show off their stories are gathering on YouTube," said Park, the columnist. "Now, the key to surviving the big competitive market is the quality of content, no matter how famous they are."