SEOUL, Nov. 21 (Yonhap) -- South Korea will cut the slots for alternative military service by about 1,300 in the coming years in an effort to cope with the dwindling number of men required to serve in the military amid a shrinking population, officials said Thursday.

By law, all able-bodied males in South Korea must complete between 18 and 24 months of compulsory military service. But the country still allows doctoral and masters degree holders, those with specialized industrial skills and sailors to work at state-designated institutes and companies instead of serving in the military.

The number of such alternative service slots is now about 7,500.

On Thursday, the government announced it will reduce the number to 6,200 in stages from 2022 through 2026. The move comes amid the steady drop in the country's birthrate that is forcing the military to downsize. 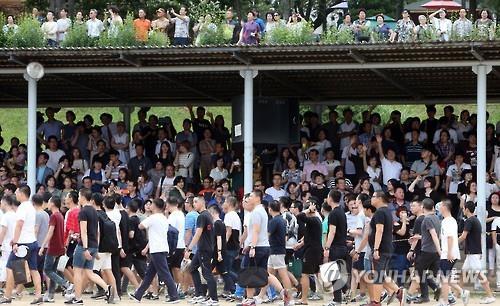 Under the reform plan, the quota for so-called expert research personnel enrolled in doctoral programs will remain unchanged at 1,000 in accordance with the need to foster qualified specialists. Of the three years such people are exempted from military service, they will be required to work one year at a local company or laboratory.

For experts with master degrees, the number will be gradually reduced by 20 percent from 1,500 at present to 1,200, although people assigned to small and medium enterprises (SMEs) that have a hard time recruiting qualified workers, will be increased. Companies engaged in industrial materials, components and equipment will receive priority in getting experts.

"There is consensus on the need to train more experts to tackle the technological challenges facing the country and help companies secure trained personnel," Koo Hyuk-chae, the head of the Future Science Human Resource Policy Bureau at the science ministry, said.

The director general said that management and supervision of such personnel will be significantly strengthened so people with masters degrees will be required to work for SMEs longer.

In regard to skilled industry personnel, who are usually graduates of vocational high schools, the number eligible for alternative service will be cut by 800 to 3,200. The government, however, plans to make it possible for such men to be employed under better working conditions.

On the issue of onboard ship reserve personnel, who can become merchant sailors instead of being conscripted into the military, will be lowered to 800 from 1,000, with emphasis again placed on improving the work environment and to make certain that such personnel are treated fairly.

Ship reserve personnel are required to be on standby to take part in the transport of critical materials in the event of war.

Besides these experts and skilled workers, no changes are planned for men allowed alternative service for achievements in the arts and sports sectors, since the numbers of those eligible already stand at only 45 annually.

The government, however, said that it did not review calls to allow special treatment for K-pop stars, such as members of BTS and other boy groups.

"The government decided not to review the issue, as it is not in line with the government's push to downsize the alternative service programs and efforts to enhance fairness and equality in the fulfillment of the mandatory military service," the government said in a release.

Fans and some politicians have voiced the need for granting exemptions to BTS which made international sensations by topping the Billboard charts. K-pop stars are often forced to leave the limelight in their prime to serve in the military.

Even for those getting other types of waivers, the rules will be tightened across the board, with more stringent oversight being applied to public health doctors and public service advocates going forward, a government source said.