SEOUL, Nov. 21 (Yonhap) -- South Korea's top security officials will hold a weekly meeting Thursday that is expected to focus on security cooperation in the looming absence of an accord with Japan on exchanging military information.

The arrangement, called GSOMIA, is slated to expire at 12 a.m. Saturday due to Seoul's decision made in response to Tokyo's export restrictions.

On Thursday morning, Chung Eui-yong, director of Cheong Wa Dae's national security office, plans to convene the last regular session with the other members of the National Security Council (NSC) standing committee ahead of the deadline.

GSOMIA seems to be on course to its demise, with Japan showing no signs of changing tack and Seoul sticking to a firm stance that Japan should first withdraw the unjust trade measure. 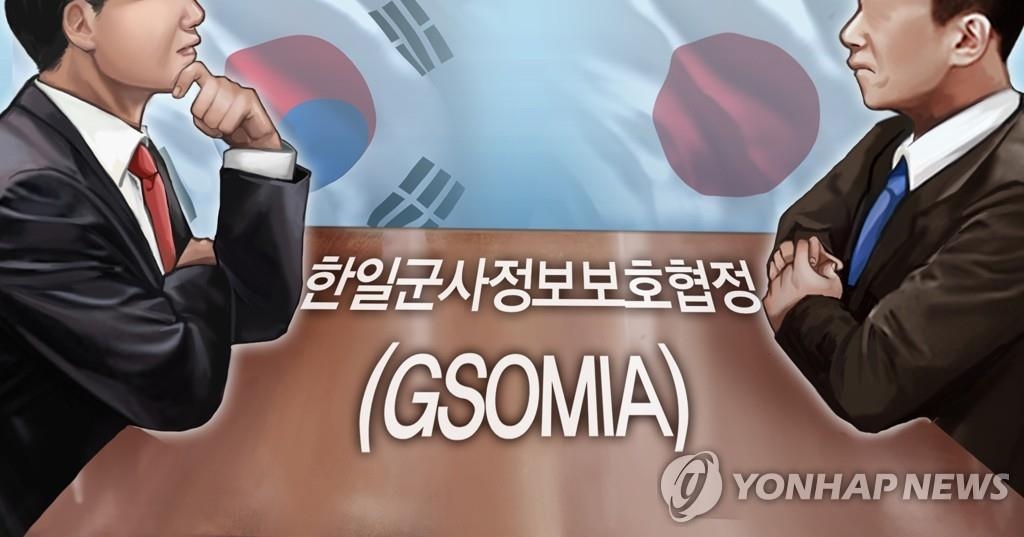 Speaking at a town hall meeting Tuesday, President Moon Jae-in made it clear it's difficult to share military information with Japan, which regards Seoul as an "unreliable" security partner. Imposing export control against South Korea, the Japanese government cited concern about strategic materials being transferred illegally to North Korea or third countries.

Moon, however, said his administration will endeavor "till the last movement" to resolve the GSOMIA and trade issues.

He was pressing Japan to change its position, as the United States has strongly called for the extension of GSOMIA, which it views as crucial in trilateral security partnerships in Northeast Asia.

Kim Hyung-chong, a deputy chief of the presidential national security office, reportedly made an unannounced trip to Washington, D.C. earlier this week.

Kim, a member of the NSC panel, is likely to brief the other attendees on the results of his consultations with U.S. officials.

Some media here raised a possibility that South Korea will seek to bolster the function and role of the existing Trilateral Information Sharing Arrangement (TISA), which uses Washington as an intermediary, as a way to maintain military information sharing with Japan.

Another apparent main topic in the NSC meeting is Washington's demand that Seoul drastically raise its financial contribution to the U.S. Forces Korea.