Only 82 percent of the subway and train services running in Seoul, Incheon and Gyeonggi Province run by Korea Railroad Corp. (KORAIL) were forecast to be in operation due to the strike with no set deadline, according to the railway operator.

The affected lines are Seoul subway lines No. 1, 3 and 4, the Gyeongui-Jungang Line and the Bundang Line.

KORAIL said it plans to mobilize additional trains during commuting hours but people using the affected lines in the afternoon suffered inconveniences.

Passengers at Sindorim Station in western Seoul had to wait over 30 minutes at times for the next train.

"I knew the schedules would be adjusted but didn't expect to wait this long. I think I'll get a bus instead," a person surnamed Han said, leaving the station. 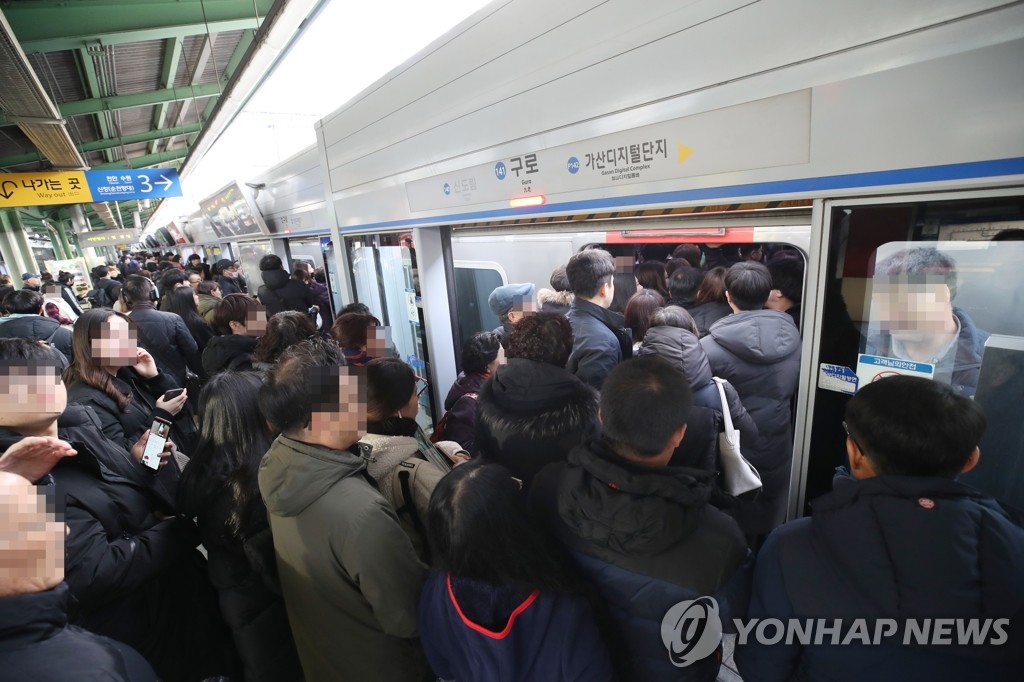 Nationwide services, such as the KTX bullet train and cargo services, also took a hit.

Only 76 percent of KTX trains were operating as of 11 a.m. compared to the normal schedule. The operation rate of passenger trains and metropolitan subways reached 65.2 percent and 86.1 percent, according to the transportation ministry.

Cargo trains were most affected, with only 25 percent of the trains in operation.

More than 7,000 KORAIL employees, or around 28.9 percent of those who should have been on duty Thursday, took part in the collective action, the ministry said.

The unionized workers began the strike Wednesday as they failed to reach an agreement with the railway operator before the strike deadline.

"Reaching an agreement is not everything," Kim told lawmakers, "A massive amount of funds are needed (to accept the demands.)"

She said the two sides should have drawn up an agreement that includes the reasons, means and plans for implementing additional employment before the strike.