SEOUL, Nov. 21 (Yonhap) -- U.S. Secretary of Defense Mark Esper said Thursday he has not heard of any plans to withdraw some American troops from South Korea unless Seoul sharply raises its share of the cost of U.S. troop presence, according to Reuters.

Esper made the remarks during a trip to Vietnam when asked about reports by a South Korean daily, Chosun Ilbo, that the U.S. is considering bringing a brigade home from the South should Seoul refuse to accept a fivefold increase, or around US$5 billion per year, in the upkeep of the U.S. Forces Korea (USFK).

"I have not heard that," Esper was quoted as saying by Reuters.

"I read articles in the media all the time that are false or inaccurate or overstated," he said, adding, "We're not threatening allies over this. This is a negotiation."

Negotiations are under way between the allies to renew the Special Measures Agreement (SMA) that stipulates their sharing of the cost for maintaining the 28,500-strong U.S. troops. On Tuesday, the two sides cut short their latest round of talks as the U.S. demanded a hefty rise in Seoul's payments by creating a new article in the accord.

Asked about its stance on the reports, USFK said in a statement sent to Yonhap News Agency, "USFK remains committed to the U.S.-ROK Alliance and providing a robust combined defense posture to protect ROK sovereignty."

"We are well aware of the reports, but it is not the official stance of the U.S. government," Col. Roh Jae-cheon, deputy spokesman of the defense ministry, told a regular briefing.

Pointing to the Joint Communique adopted following the 51st Security Consultative Meeting between U.S. Secretary of Defense Mark Esper and South Korea's Defense Minister Jeong Kyeong-doo on Friday in Seoul, the spokesperson noted the U.S.' commitment to the continued stationing of its troops on the Korean Peninsula.

"The two countries share a firm notion regarding their roles and importance for peace and stability of the Korean Peninsula and Northeast Asia," he added.

Article 7 of the joint statement read, "The Minister and the Secretary noted that U.S. forces in the ROK have played a critical role in maintaining peace and stability on the Korean Peninsula over the past 66 years, and reaffirmed that U.S. Forces, Korea (USFK) will continue to play an important role in preventing armed conflict on the Korean Peninsula and promoting peace and stability in Northeast Asia."

It continues, "Given the current security environment, the Secretary also reaffirmed the commitment to maintain the current level of the U.S. military personnel in the ROK and to enhance combat readiness." 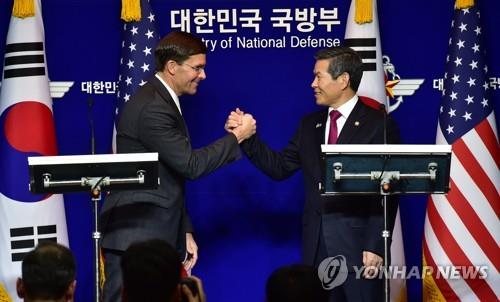 (2nd LD) Esper: Unaware of any plans to withdraw troops from S. Korea

(2nd LD) Esper: Unaware of any plans to withdraw troops from S. Korea