SEOUL, Nov. 22 (Yonhap) -- South Korea on Friday suspended its earlier notice to Japan regarding the expiration of a military intelligence-sharing pact with its neighbour, thereby likely providing a fresh impetus to resolve their monthslong bilateral trade dispute.

While the General Security of Military Information Agreement (GSOMIA) was scheduled to expire at midnight Friday, the Seoul government made a last-minute decision to suspend the August notice regarding the termination of the military information-sharing pact and all legal procedures over their trade row at the World Trade Organization (WTO).

The two countries also agreed to begin working-level meetings to discuss each other's export procedures, although Japan said its curbs on key industrial materials exported to S. Korea would be maintained.

South Korea decided in August to terminate the pact after Japan imposed export restrictions targeting Seoul in a dispute over wartime forced labor.

In July, Japan said it would implement export restrictions of key industrial materials, crucial for the production of chips and displays, citing Seoul's lax control system of strategic items that can be diverted for military use, although it provided neither clear evidence nor sufficient explanations to back up its claim.

But the Seoul government views the measure as an apparent economic retaliation against the country's Supreme Court ruling that ordered compensation for Koreans forced into labor during Japan's 1910-45 colonial rule of the Korean Peninsula.

Despite repeated calls for the nullification of the export regulations and dialogue, Tokyo also stripped South Korea from its list of trusted trade partners, a move that South Korea reciprocated.

Japan's export restrictions were widely viewed as an economically calibrated ploy against the South Korean economy, of which semiconductors account for nearly one-fifth of outbound shipments.

Following the escalating tension, the extension or ending of the military info-sharing pact has been regarded as a key indicator of whether the two neighbors would patch up their frayed relations.

The delay in the intel-sharing pact's expiration may buy more time for the two countries' negotiations to resolve their trade tussle, according to experts.

"South Korea has remained steadfast on terminating GSOMIA, but the government is believed to have changed its stance considering various factors, including the protest from the United States," said Cheong In-kyo, a professor of commerce at Inha University.

South Korea also decided to suspend the ongoing legal dispute process at the World Trade Organization (WTO), which has been facing a deadlock, while the two countries are in talks to address it.

In September, South Korea filed a complaint with the WTO over Japan's export controls. Despite the two rounds of talks held in October and this week, the two countries haven't eliminated their differences.

Experts earlier said it could have taken years for the issue to be settled at the WTO.

"The dispute at the WTO may run for more than two years, when the two countries show no signs of making a concession," said Kim Seung-hyun, a researcher at the Korea Institute for International Economic Policy.

South Korea claims Japan has violated a set of international trade rules, including Article 11 of the General Agreement on Tariffs and Trade (GATT), which bans regulations on export volumes unless the products have a serious impact on national security. 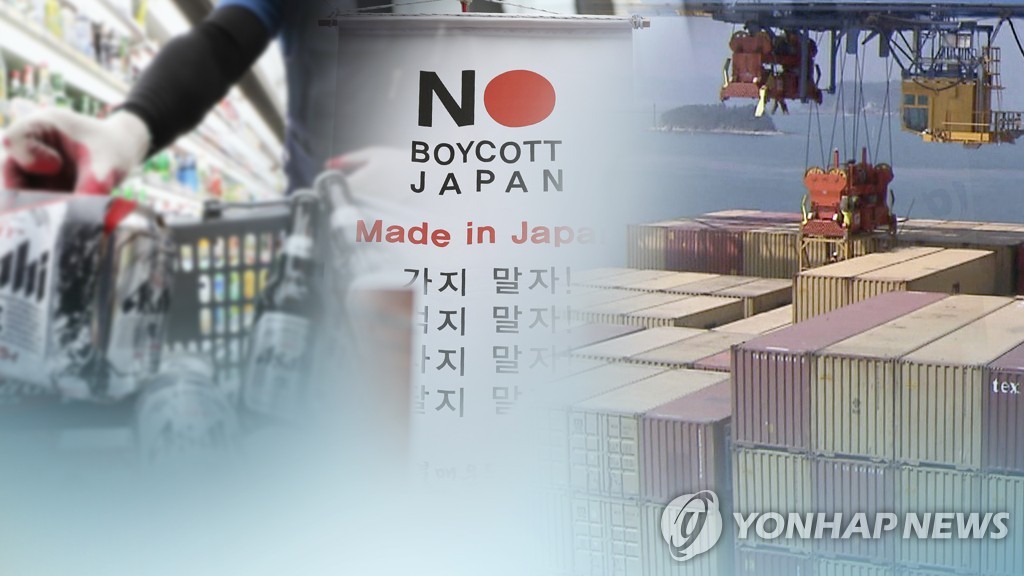 Since Japan's export curbs went into effect in early August, South Korean consumers have boycotted Japanese products, and flights to and from Japan have dropped sharply due to lower demand.

The number of South Koreans visiting Japan dropped 65.5 percent in October from a year earlier to 197,300, according to the Japan National Tourism Organization.

"The latest boycott campaigns were different from those seen in the past, as they are lasting for a quite long period," said Kang Cheol-gu, a professor of Japanese studies at Pai Chai University.

Meanwhile, South Korean companies, such as Samsung Electronics Co. and LG Display Co., have been working on replacing Japanese materials with local supplies for their production of semiconductors, a move that could offset Japan's restrictions on high-tech exports to South Korea.

Many have warned that Japan's export curbs will wreak havoc on the global economy, as well as on global supply chains.

South Korean chips are used around the world in a wide range of products, including computers, smartphones, tablets, electronic appliances and cars.