SEOUL, Nov. 21 (Yonhap) -- The main opposition Liberty Korea Party (LKP) will push to eliminate more than a third of its incumbent lawmakers from nominations for next April's general elections, a top party official said Thursday.

LKP Secretary General Park Maeng-woo disclosed the party's nomination policy after attending a meeting of the party's general election task force amid mounting calls for a sweeping overhaul of the conservative party.

Park said about a third of incumbent LKP lawmakers elected from district constituencies are expected to drop from the party's nominations for the April 15 general elections.

Including those who have already declared their intent not to run for the upcoming general elections and lawmakers elected under the proportional representation system, more than half of the LKP's lawmakers will be replaced by new faces in the new parliament, Park explained.

At present, the LKP has 108 lawmakers, including 91 elected from local constituencies. According to Park's remarks, about 30 of the 91 lawmakers are expected to fail to win the party's nominations next year. 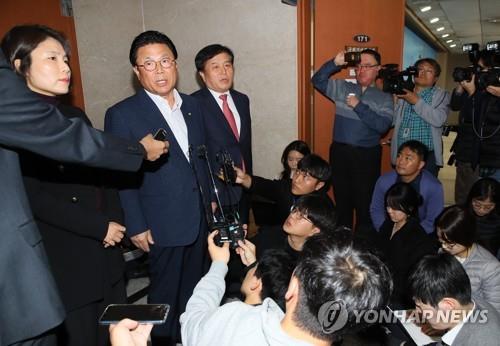 Park was asked if senior lawmakers will lose their nominations, but he declined to give an answer.

As part of its nomination reform carried out ahead of the 2012 general elections, 41.7 percent of the LKP's district constituency lawmakers lost their nominations.

Asked to comment on possible resistance from incumbent lawmakers over the looming nomination reform, another ranking party official said all lawmakers will yield to the new rules as long as they are applied fairly.

Recently, Rep. Kim Se-yeon, a three-term lawmaker of the LKP, said he won't seek his fourth term, calling for the current LKP leadership to step down and for the party to make a new start to win back the hearts of the voters before the general elections.

In a Gallup Korea poll released last Friday, public support for the LKP was tallied at 21 percent, a decrease of 2 percentage points from a week earlier, compared with 40 percent for the ruling Democratic Party.

A third of LKP lawmakers may lose nominations for general elections

A third of LKP lawmakers may lose nominations for general elections