SEOUL, Nov. 22 (Yonhap) -- Hyundai Motor Co. said Friday it will launch the Lafesta electric vehicle in China next year as it strives to revive sales in the world's biggest auto market.

Hyundai unveiled the Lafesta sedan at the 17th China Guangzhou International Automobile Exhibition that opened Friday and lasts through Dec. 1, along with dozens of other environment-friendly vehicles.

"We expect the Lafest EV will strengthen our environment-friendly car lineup in China and help make a presence in the local electric vehicle market," Cha Seog-ju, executive vice president and chief technology officer of Hyundai Motor Group (China) Ltd., said in a statement. 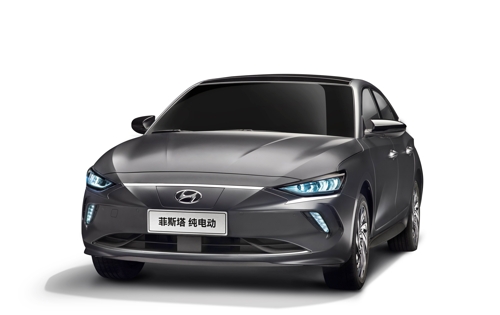 The Lafesta EV is the eco-friendly version of the China-specific sporty sedan Lafesta, released in October last year. The all-electric model will be available in the Chinese market in the first half of 2020, the statement said.

The model equipped with a 56.5 kilowatt-per-hour lithium-ion battery can travel up to 490 kilometers on a single charge. It takes 40 minutes to charge up to 80 percent of the battery at a fast charging station and takes nine and a half hours to fully charge the battery at a slow charger, Hyundai said.

The maker of the Sonata sedan and the Santa Fe sport utility vehicle also added a sharp, agile and athletic appeal derived from the image of a shark.

In China, Hyundai has been suffering declining sales due to increased competition and lack of new models, though political tensions between Seoul and Beijing caused by the deployment of an advanced U.S. missile defense system, called THAAD, in South Korea in 2017 have since eased.

(LEAD) Hyundai to launch Lafesta EV in China next year

(LEAD) Hyundai to launch Lafesta EV in China next year