SEOUL, Nov. 22 (Yonhap) -- Artificial intelligence (AI) has entered the workplace to change the way we work, and now it is stepping into the recruiting process and analyzing interviews to evaluate candidates.

A growing number of Korean companies are adopting some form of AI system as part of their hiring process to save time and reduce human bias, and some of the nation's most prominent employers have joined the latest job market trend.

Genesis Lab, a Seoul-based startup with a focus on "emotion recognition AI" has collaborated with LG Electronics Inc. and LG Uplus Corp. to adopt its "Viewinter HR Solution" in this year's recruiting process. It is the first time affiliates of a major Korean conglomerate have adopted AI interviews in its regular hiring process.

"Our AI technology does not just read facial expressions. It is designed to capture various traits of job seekers based on a deeper understanding of human behaviors," Lee said during an interview with Yonhap News Agency at the firm's Seoul office. "The solution helps predict social skills, including their communication skills and attitudes." 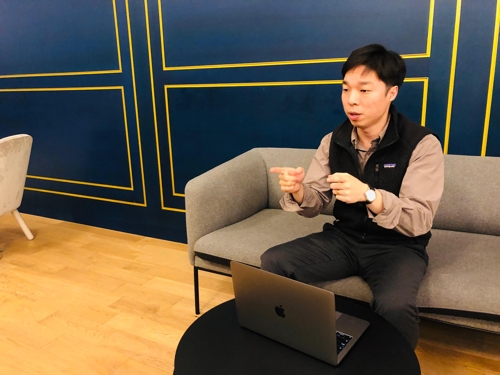 Lee predicted the use of AI will first be adopted by major companies, which are in need of ways to find top talent from a massive number of applicants.

As the sheer volume of applications makes it hard for human resources (HR) staff to read all of them carefully, the AI system can help screen them in the early stage and allow employers to engage more closely when dealing with applicants in person, according to the former researcher at Samsung Electronics.

"It is not easy to pick the right employees when there are so many applicants, leading recruiters to spend so much time weeding out unfit candidates and mostly asking basic questions in the interview sessions," Lee said. "By saving time in the early process, the AI system can help HR staff focus on a select number of candidates to get to know them better."

Another advantage of using AI in the hiring system is that algorithms leave little room for subjectivity, bias and other influences, he noted.

"Unlike machines, humans can be biased, sometimes based on applicants' appearances and their personal and academic backgrounds," the 36-year-old entrepreneur said. "I was surprised to see how the AI consistently evaluates candidates based on its algorithms developed using existing data."

To develop its own AI scoring system, Genesis Lab had personnel experts with decades of hiring experience at major companies watch sample video interview clips and score potential job seekers on various traits. The AI technology then studied the experts' evaluation patterns and criteria to build its own deep learning algorithms.

The firm's developers also closely communicated with personnel managers and engineers at the two LG affiliates for several months to customize the AI solution for their hiring system. 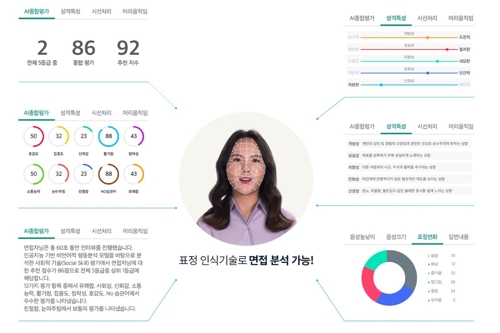 "As LG's personnel managers and senior executives were involved in the AI hiring system development process, our system could provide a customized solution for the companies," Lee said.

The chief executive said Genesis Lab's AI solution is not designed to replace HR staff but to assist them to speed up the process of getting the right candidate in the door. The key is when and how to effectively use the technology in the hiring process, he added.

"The AI video analysis solution was used as a trial for this year's hiring process at two LG companies, but it will fundamentally change the recruiting process in more companies down the road," Lee said.

As AI's deep learning algorithms improve with every video interview, the three-year-old firm aims to focus on expanding collaboration with major conglomerates to accumulate data needed for advancing its emotion AI technology.

"We aim to target the business-to-business market first, primarily large conglomerates in the nation," he said. "Based on the experiences, we can offer our solution to other recruiting companies to expand applications in various areas."

Although the AI job interview market is only beginning in South Korea and related technologies need further research and development, Genesis Lab's business model was able to draw seed funds from Naver D2 Startup Factory and Blue Point Partners, which concentrates on bridging talented high-tech entrepreneurs. The company didn't disclose the amount of their investment.

"We started the AI job interview business in South Korea, but our technology has much potential for the global market," Lee said. "For that goal, we need to expand collaboration with large companies to have references in the field."

As a first step, the company is exploring ways to enter the Japanese job market, which has witnessed a broader use of AI in the recruiting process, including for part-timers. Plus, its AI facial recognition technology is better at scanning Asian faces compared with Western companies' video interviewing software, Lee stressed.

"Japan has a similar job market with Korea where large conglomerates hire graduates on a massive scale," Lee said. "For the AI job hiring system to make progress, technology, data pipelines and the market are important. We will keep working on creating better use cases to advance the technology."