SEOUL, Nov. 22 (Yonhap) -- Defense Minister Jeong Kyeong-doo cut short his trip to Saudi Arabia and returned home ahead of schedule on Friday, his office said, amid speculation it may have something to do with an expiring military information-sharing pact with Japan.

Jeong had planned to stay in the Middle Eastern country until Saturday for a five-day official visit at the invitation of Riyadh. But he returned home one day ahead of schedule "because part of his itinerary was changed due to circumstances in Saudi Arabia," according to defense ministry officials.

Some speculate that his early return has something to do with the military information-sharing pact between South Korea and Japan, which is set to expire at midnight Friday unless the two sides find a breakthrough.

In Saudi Arabia, the minister met with senior officials there, including Crown Prince Mohammed bin Salman, and discussed ways to further enhance bilateral defense ties and boost exchanges and cooperation in defense industries, the officials said.

The trip reciprocated a June visit to South Korea by the crown prince, who also serves as the country's defense minister, according to the ministry. 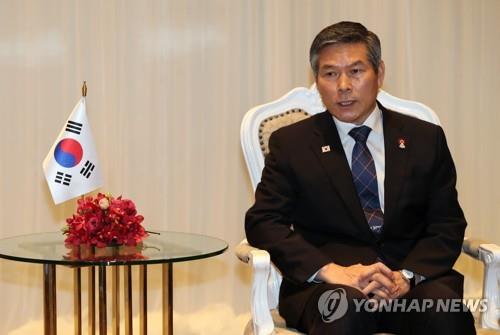 Before flying to Saudi Arabia, Jeong visited Thailand to attend the multilateral meeting of the 6th ASEAN Defense Ministers' Meeting-Plus (ADMM-Plus), during which he met with his counterparts from partner nations, including Japan, China and the United States.

His trip to Thailand drew particular attention as it was seen as a chance for Seoul, Tokyo and Washington to find a solution together to save the three-year-old intelligence-sharing pact, called the General Security of Military Information Agreement (GSOMIA), which has been on the verge of expiring. But they failed to narrow differences.

The impending expiry comes as South Korea announced its decision in August to end the accord in response to Japan's export curbs on South Korea, citing security concerns, in apparent retaliation for South Korean Supreme Court rulings last year on wartime forced labor.