SEOUL, Nov. 22 (Yonhap) -- The Grammy Awards, one of the major American pop music award events, have become fodder for criticism after K-pop band BTS was shut out of the nominations for the 2020 Grammys.

Many eyes had been on BTS' possible nomination when the American Recording Academy announced the 2020 list of nominees Wednesday following the septet's unprecedented feats in the American music scene this year.

With its latest album, "Map of the Soul: Persona," BTS topped the Billboard 200 album chart, becoming the first musicians to top the chart three times within the time period of one year since legendary British band the Beatles.

BTS' unprecedented performance in the mainstream American music scene wasn't recognized by the 2020 Grammy nominations, triggering criticisms within the American music industry over the Grammys' unwillingness to recognize artists from other cultures. 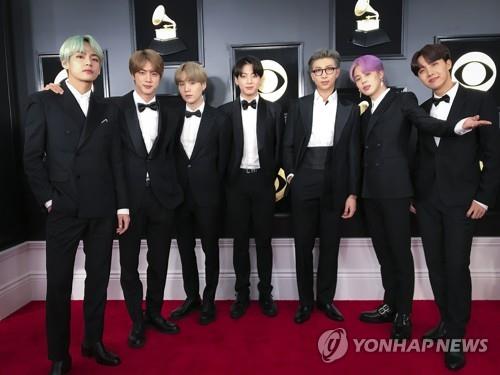 Forbes magazine zeroed in on the Grammys' "antiquated" quality and "voting bias" in an article carried on Wednesday (U.S. time).

"The group seemed like a shoo-in for Grammy nominations ... But by shutting BTS completely out of the 2020 Grammy nominations, the Recording Academy yet again revealed its perennial cultural blind spot and proved to be woefully out of touch with popular music trends," Forbes said.

The magazine also pointed to the Grammys' "tenuous relationship with race."

Its nominees and winners reveal "a voting bias within the Academy, as artists of color are repeatedly 'othered' and mediocre works from legacy acts are awarded over critically and commercially successful efforts from contemporary artists," it said.

American pop magazine Rolling Stone accused the Grammys of "lagging behind" for ignoring BTS for the 2020 award event.

"The problem extends beyond BTS: American listeners are ranging more widely than ever before, increasingly enthralled by singers from South Korea, but also by artists from Nigeria, Colombia and Spain," according to Rolling Stone.

The music industry is "beginning to acknowledge" that, "but the Grammys, as per usual, lag behind," the magazine said.

American musician Halsey, who collaborated with BTS on "Boy With Luv," also expressed her disappointment over the Wednesday results, tweeting that "BTS deserved many nominations."

"I am, however, unsurprised that they weren't acknowledged. The U.S. is so far behind on the whole movement. The time will come," she said.

This weekend, many eyes will again be placed on the results of another major event, the American Music Awards of 2019, which are scheduled for Sunday evening (U.S. time).

BTS is competing in three of the event's categories -- Duo or Group-Pop/Rock, Social Artist and Tour. 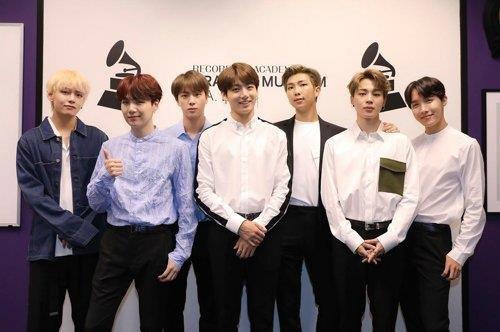 Grammys under fire after BTS wasn't nominated for 2020 event

Grammys under fire after BTS wasn't nominated for 2020 event