In that sense, he expects this week's special summit between the two sides to be a "significant milestone," as they are commemorating the 30th anniversary of establishing bilateral dialogue relations.

The ASEAN-Republic of Korea Commemorative Summit will be held in the southern port city of Busan on Monday and Tuesday, bringing together Lee, the leaders of nine other Southeast Asian countries and South Korean President Moon Jae-in.

It is an "opportunity to set the direction for deeper cooperation between ASEAN and Korea," the prime minister said in a "curtain raiser" written interview with Yonhap News Agency. 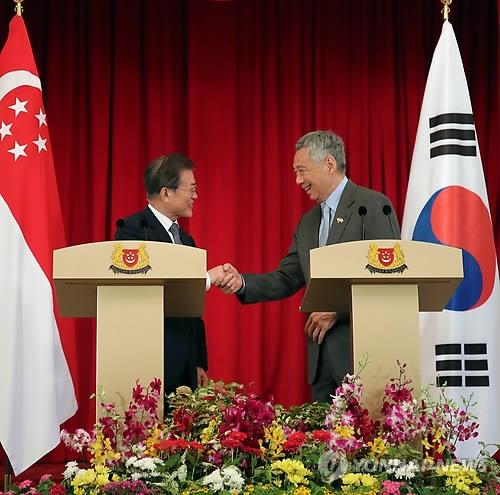 On multilateralism, he held out expectations for a signing next year of the Regional Comprehensive Economic Partnership (RCEP), talks which made some progress during an ASEAN-hosted summit in Bangkok earlier this month.

"ASEAN and ROK can strengthen connectivity, e.g. by concluding an ASEAN-ROK Air Services Agreement," he said, using the acronyms of the Republic of Korea, which is South Korea's official name.

In 2018, the number of visitors traveling between South Korea and ASEAN countries hit an all-time high of 11 million, and two-way trade volume totaled US$160.5 billion. Lee expressed optimism that tourism exchanges between the two sides can reach 15 million travelers by 2020.

In connection with digital technology, he added, "The ASEAN Smart Cities Network is a useful platform for collaboration."

"The ROK contributes actively to the ASEAN process in fields such as Humanitarian Assistance and Disaster Relief (HADR), maritime security and transnational crimes," he noted. "We are also looking to strengthen collaboration in new areas such as cybersecurity. We are also collaborating on other areas such as connectivity, smart cities and sustainable development."

He struck an upbeat note as well on one-on-one partnerships between Singapore and South Korea, saying a South Korean "startup center" will be set up in the city-state soon.

"Singapore and ROK are also exploring collaboration in cybersecurity and fintech," he added.

Singapore, together with other ASEAN members, look forward to working with South Korea and the international community to "achieve lasting peace and prosperity on a denuclearized Korean Peninsula," he said.

"This is an extremely difficult problem, which will take great effort and patience to resolve," he pointed out.

Singaporeans "were happy to have played a small part in the Korean peace process" by providing the venue for the first meeting between U.S. President Donald Trump and North Korean leader Kim Jong-un last year, he added.