BUSAN, Nov. 22 (Yonhap) -- First lady Kim Jung-sook said Friday that food will provide an opportunity for South Korea and member states of the Association of Southeast Asian Nations (ASEAN) to better understand each other's culture and deepen their mutual friendship.

Kim made the remarks during her visit to the 2019 South Korea-ASEAN Food Street, an event hosted by Busan on the sidelines of next week's South Korea-ASEAN special summit. The food festival kicked off at the Norimaru Youth Center in Busan on Nov. 15, featuring leading cuisines from South Korea and the 10 member states of ASEAN.

During the festival, chefs from ASEAN member states sold their own foods to visitors, and cooking competitions were held using ingredients from South Korea and Southeast Asian countries. 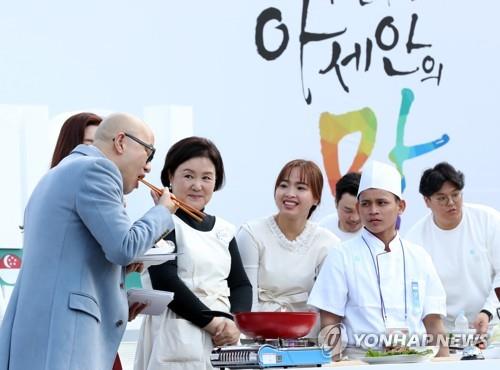 Kim visited all the food booths of the 10 ASEAN member states, spoke to visiting ASEAN chefs and had lunch with participants of a food contest.

"We can know the food and culture of a country by cooking. I appreciate this opportunity to learn about the culture of other countries through their dishes in a short time," Kim said.

She participated in a food contest as a member of the Cambodian team.

"I wanted to join the opportunity to make friendships through food," she said, asking everyone on hand to fully enjoy the ASEAN cuisines.

After the food competition, the Cambodian team won an overseas airplane ticket as a prize but yielded it to a student from Myanmar.