SEOUL, Nov. 22 (Yonhap) -- Friday's dramatic decision by South Korea to put off the planned expiry of a military information-sharing pact with Japan created much-needed opportunities for Seoul to shore up trust with Washington and mend fences with Tokyo, analysts here said.

The presidential office Cheong Wa Dae announced the country will suspend its previous decision to terminate the General Security of Military Information Agreement (GSOMIA), and that Seoul and Tokyo will hold director general-level talks on their trade issues.

The suspension decision came as Washington has been heaping extraordinary pressure on Seoul to salvage the military pact, which it sees as a symbolic yet crucial framework to promote its trilateral security cooperation with the two Asian allies. 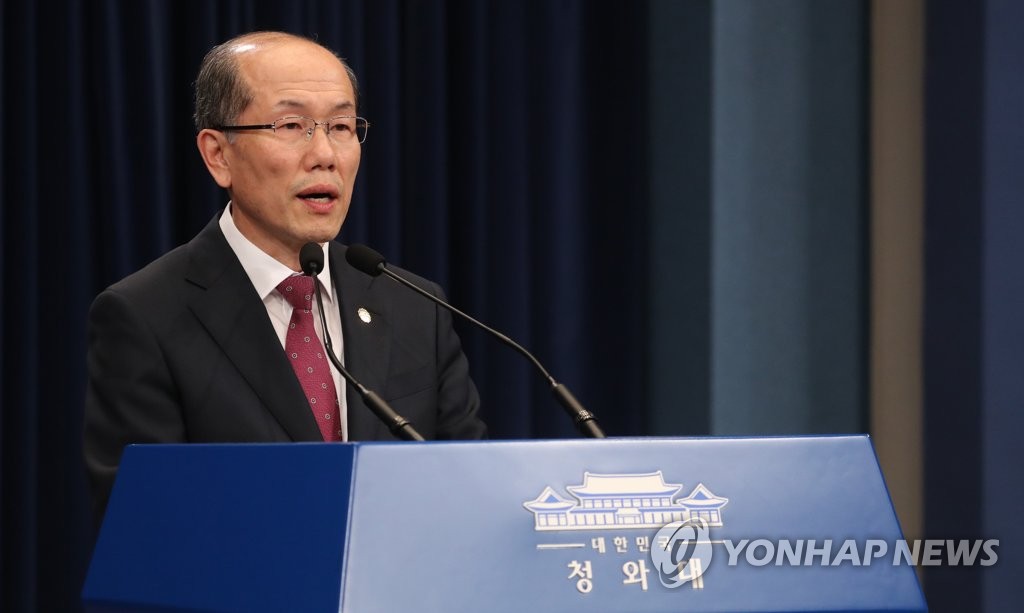 "The postponement gives more time for Seoul and Tokyo to explore a compromise. Above all, Seoul has avoided the risks of further straining ties with and eroding trust with the United States," said Park Won-gon, professor of international politics at Handong Global University.

"At the least, the postponement could also be a face-saving move for Washington, which has heavily invested its diplomacy in forestalling the GSOMIA demise," he added.

Following the delay, many security experts here breathed a sigh of relief, saying that if GSOMIA had been left to expire, it would have triggered a serious diplomatic blowback from the U.S.

Washington has viewed Seoul's decision to terminate the pact as a move that would erode trust with it, put American troops on the peninsula at a greater risk and undercut its drive to strengthen its alliance network to keep what it calls the rules-based order in the face of a recalcitrant North Korea, an assertive China and a re-emergent Russia.

Seoul made public the decision in August in response to Tokyo's export restrictions, which it views as political retaliation for last year's Korea Supreme Court rulings that ordered Japanese firms to compensate victims of forced labor during Japan's 1910-45 colonization of the peninsula.

Right after the announcement, Washington expressed "strong concern and disappointment" on the decision that would affect its security interests and sent its senior officials to persuade Seoul to retract the decision.

South Korea had insisted that it would stick to the decision unless Japan revokes the export curbs, including its removal of Seoul from the "whitelist" of favored trade partners that do not need to undergo tough screenings in importing "strategic items" that could potentially be diverted for military use.

Tokyo pointed to security concerns and an erosion of trust with Seoul as its rationale behind the export control measures, causing Seoul to reconsider its security collaboration with the neighbor.

Nam Chang-hee, professor of political science at Inha University, said that the postponement would reflect Seoul's concerns about possible ramifications on its efforts to ensure cooperation with the U.S. over a range of key issues including the hitherto unfruitful process of denuclearizing North Korea and fostering a lasting peace on the peninsula.

"Since cooperation with the U.S. was vital in securing cooperation in tackling the long-elusive North Korean nuclear quandary, Seoul might have found it difficult to turn a blind eye to the U.S. call to retain the GSOMIA," Nam said.

"No doubt that the delay set the mood for greater trust with South Korea's ally, the U.S.," he added.

Ahead of the postponement, fears persisted that the U.S. could consider a variety of measures to display its displeasure over the potential GSOMIA expiration, including slapping higher tariffs on South Korean steel and automotive products.

Some argued that the GSOMIA expiry could lead to greater pressure by the U.S. to contribute to its Indo-Pacific strategy, America's regional policy initiative seen by many as a counterweight to China's One Belt and One Road initiative.

There have been worries that stronger cooperation with the strategy could unnerve China, South Korea's crucial partner for trade, tourism and not least the ongoing efforts to entrench an enduring peace on the peninsula.

Observers even cited the possibility that the U.S. may ramp up pressure on South Korea to provide more financial contributions to help offset the security risks that the absence of GSOMIA would pose to the 28,500-strong U.S. Forces Korea.

Cautious optimism has also emerged for engagement between Seoul and Tokyo.

"The end of the pact would have spelled more trouble ahead for any negotiations between Seoul and Tokyo over their shared history and trade," said Park of Handong Global University. "The delay has opened possibilities for a compromise."

Seoul and Tokyo have locked horns over the interpretation of the 1965 pact aimed at normalizing bilateral ties after Japan's colonial rule.

Seoul argues that the top court rulings on forced labor recognized individual victims' rights to claim damages. Tokyo, however, argues that all reparation issues stemming from its colonial occupation were settled under the accord.