Early in the show, the septet was announced as the winner of Favorite Duo or Group - Pop/Rock in the 2019 AMAs ceremony held at Microsoft Theater in California on Sunday night (U.S. time).

BTS then lifted two other awards for Tour of the Year and Favorite Social Artist, winning all three categories in which the band was nominated for the 2019 AMAs.

It marks the second consecutive year the band has been awarded at the AMAs, considered one of the three major pop music awards in the U.S.

BTS competed with Jonas Brothers and Panic! At The Disco for Favorite Duo or Group, while rivals for Tour of the Year included such iconic pop figures as Ariana Grande, Elton John and Ed Sheeran.

BTS didn't join the ceremony in the U.S., but the band expressed its special thanks to fans in a video message after Favorite Duo or Group was awarded.

"We are so honored to receive such an important, meaningful award," the youngest member Jungkook said.

The team's leader attributed the band's feat to its fans, famously known as "ARMY."

"We couldn't have really done it without (your) love and support," RM said, adding that, "We will try our best to live up to it and will try hard and work hard."

Last year, BTS was awarded Favorite Social Artist at the annual award ceremony, becoming the first Korean artists to win an award at the AMAs.

This year, BTS has experienced the best year of its six-year group career, becoming the first music act since the Beatles to have three Billboard 200 No. 1s in the span of one year.

"Incredible year for us, and throughout 'Love Yourself Speak Yourself Tour' we have the honor of meeting so many people all over the world," RM said in another video message following the Tour of the Year victory.

"This tour may be over, but we hope the message of the tour will continue ... evermore. The message must be find the way to love yourself," the leader said. 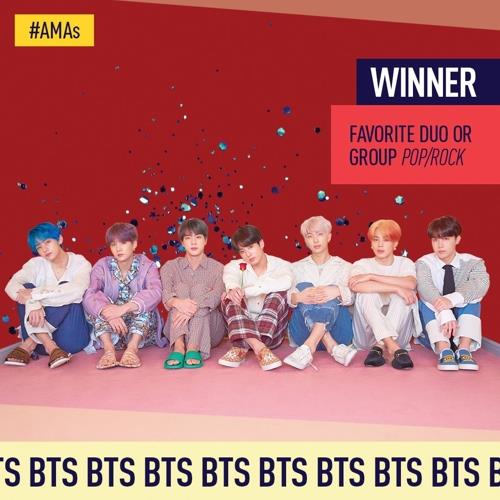