SEOUL, Nov. 25 (Yonhap) -- South Korea's Himchan Hospital has opened a new branch in Uzbekistan, the first time that a local health care provider has set up a medical center in the Central Asian country, the health ministry said Monday.

The 100-bed general hospital in the city of Bukhara, has orthopedics, general internal medicine and neurosurgery departments. Himchan is dispatching around 40 people, including two doctors and two nurses from South Korea, with 176 medical workers hired locally so as to provide the best possible care to patients.

Himchan, which is well respected in the field of joint and spinal treatments, is working with Uzbekistan's national medical school to pass on its knowhow in physiotherapy.

The hospital, which has eight medical centers in South Korea, said it has spent 10 billion won (US$8.5 million) on the project, with construction starting in September of 2018.

The Ministry of Health and Welfare said the latest headway follows Seoul and Tashkent's signing of a memorandum of understanding in 2011 that helped build bilateral cooperation and trust in the medical field.

The ministry said that since June 2017, when the country introduced a reporting system for health care providers going abroad, 66 hospitals and clinics have expanded to 18 countries worldwide. 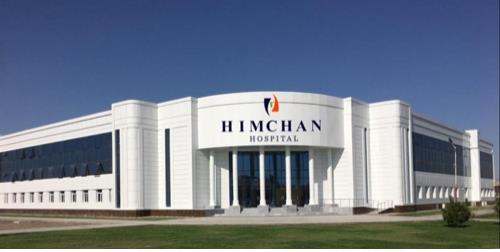