BUSAN, Nov. 25 (Yonhap) -- President Moon Jae-in called for greater cultural cooperation between South Korea and the Association of Southeast Asian Nations (ASEAN) on Monday, saying the cultural content industry is one of the most promising sectors of growth.

Moon made the remark as he opened a cultural forum in the port city of Busan, 450 kilometers southeast of Seoul, on the sidelines of a special summit between leaders of ASEAN and South Korea marking the 30th anniversary of their dialogue relations.

"Asia was where hallyu began. Singularly Korean content struck a chord with Asia first, and ASEAN was at its center. Korea's cultural content was able to spread to the rest of the world based on ASEAN's love," Moon said, referring to the global popularity of Korean cultural products, or hallyu.

"Cultural content is, beyond culture itself, the most promising growth industry. Based on shared cultural identity, South Korea will be ASEAN's partner in the field of cultural content," he said.

"When ASEAN and Korea meet, ASEAN culture can quickly become a global culture. I propose today that we move together toward the world of ASEAN-culture, from K-culture."

South Korea will push for more active two-way exchanges to promote ASEAN culture, cultural diversity and creativity through such efforts as expanding youth education in culture and arts and by establishing a joint film promotion organization for Korean and ASEAN content, Moon added.

Over 600 guests attended Monday's event, including several leaders of ASEAN nations as well as government and industry officials. Bang Si-hyuk, chief of Big Hit Entertainment and producer of K-pop boy band BTS, delivered a speech during the session. He was followed by Netflix CEO Reed Hastings. 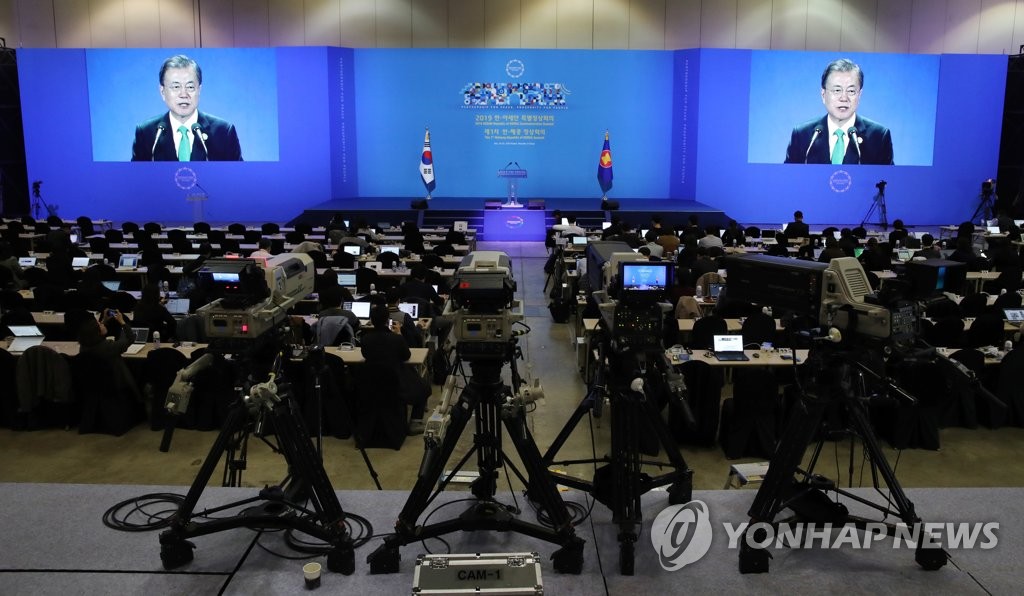 As a presenter of the forum's first session, Bang stressed the importance of investment in human beings as the driver of growth in the fourth industrial revolution.

"People across the world were fascinated by Korean-language performances of BTS, which started from a small management agency in an Asian country," the Big Hit head said, illuminating how the K-pop band grew from obscurity to a global sensation.

"Quality content of today (that could resonate with the world) is something universal, which everybody could believe to be their own story," according to Bang.

He called for more investment in human beings, saying only humans can create such quality content.