SEOUL, Nov. 25 (Yonhap) -- Hyundai Motor Co.'s Palisade and Kia Motors Corp.'s Telluride sport utility vehicles have been named finalists for this year's North American car of the year, Hyundai Motor Group said Monday.
Last week, a jury of automotive journalists from numerous outlets in the United States and Canada selected nine finalists for the title of 2020 North American Car of the Year, Utility of the Year and Truck of the Year (NACTOY) out of 29 semi-finalists after evaluating them based on innovation, design, safety, driver satisfaction and value for the U.S. dollar.

The nine include Hyundai's Sonata sedan and Palisade SUV and Kia's Telluride SUV, the group said in a statement. The Telluride, manufactured in Kia's U.S. plant and sold in North American markets only, was named the 2020 SUV of the year by MotorTrend.

Every year, the jurors vote on the finalists after spending months driving dozens of new vehicles. To be eligible, vehicles must be all-new or substantially new and available at dealerships before the end of the year, NACTOY said in a statement.

"Competition in the red-hot utility category is especially tough, with entries from a variety of mainstream and luxury classes, including a strong set of three-row crossovers and a new electric SUV," NACTOY Secretary Kirk Bell said in the statement.

The group expects the fact that Hyundai and Kia made it to the NACTOY list with their three models will help boost sales in the U.S., the world's most important automobile market.

The winner of the NACTOY will be announced at the Detroit Auto Show on Jan. 13, next year. 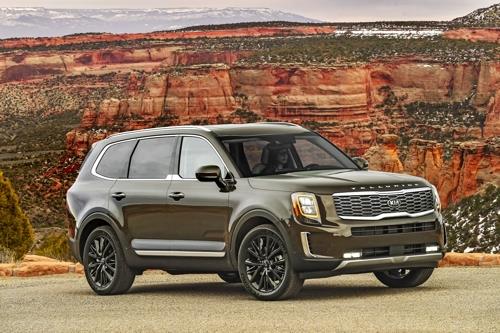