BUSAN, Nov. 26 (Yonhap) -- South Korea and the Association of Southeast Asian Nations (ASEAN) will lay out a vision for their future partnerships on Tuesday, wrapping up a two-day special summit here.

President Moon Jae-in and the leaders of 10 Southeast Asian countries are scheduled to hold two sub-sessions at the ASEAN-Republic of Korea Commemorative Summit throughout the day and issue a statement summing up the results of their discussions.

In the document, they will review bilateral ties over the past three decades and map out a framework for closer cooperation going forward.

It is also to include the Moon administration's commitment to the New Southern Policy. 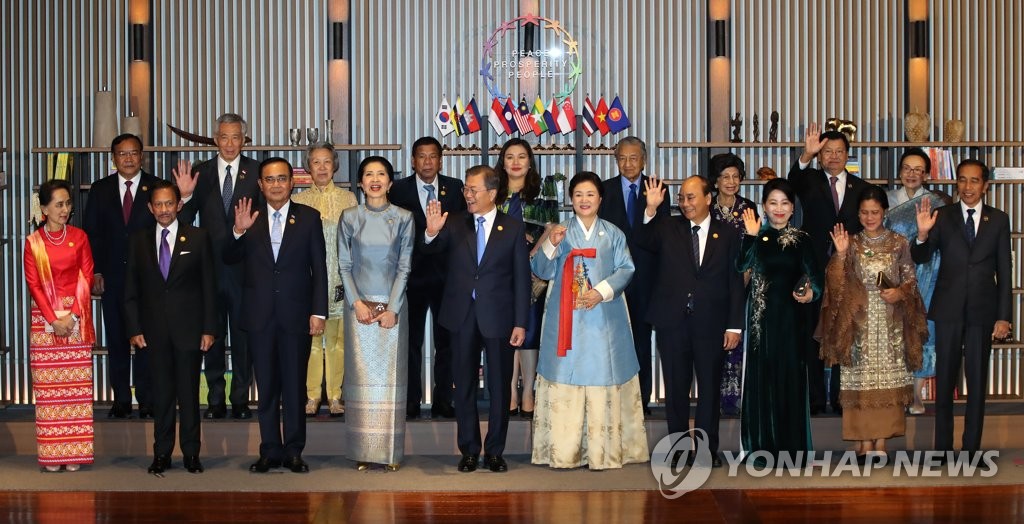 Moon also plans to participate in the ASEAN-Republic of Korea Business and Startup Expo to be held on the sidelines of the group summit.

Cheong Wa Dae said it would set the stage for declaring cooperation for the creation of a "global start-up ecosystem" between the two sides.

He will then have one-on-one talks with Myanmar State Counsellor Aung San Suu Kyi and Lao Prime Minister Thongloun Sisoulith.

And Moon is to host an official welcoming dinner for the inaugural Mekong-Republic of Korea Summit to be held on Wednesday. It would involve the leaders of the "Mekong five" nations -- Cambodia, Laos, Myanmar, Thailand and Vietnam.

Meanwhile, first lady Kim Jung-sook plans to attend a K-beauty festival along with the spouses of participating leaders, students, members of multi-cultural families and cosmetics firms.