SEOUL, Nov. 26 (Yonhap) -- K-pop sensation BTS will heat up year-end festivities with a series of high-profile performances in its home country of South Korea and outside.

With the 2019 Melon Music Awards scheduled for Saturday at Gocheok Sky Dome in Seoul, BTS will begin its run of performances throughout December, providing an unusually entertainment-packed month.

"This year also, BTS will be presenting special performances for fans from across the world. There will also be a special concept performance that highlights the individual characters of the seven members," the organizer of the annual music awards show said. 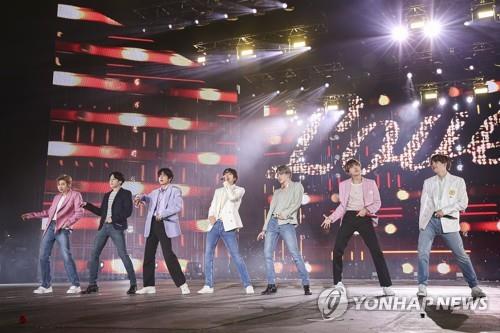 This will be followed by the band's appearance at the 2019 Mnet Asian Music Awards four days later on Dec. 4 to be held in Nagoya Dome in Japan.

BTS will then fly to the United States to hit this year's KIIS FM Jingle Ball concert, slated for Dec. 6 the same week at California's the Forum arena in Inglewood.

In a video posted on the annual show's SNS accounts, BTS has announced that it will take the Jingle Ball stage as the opening artist.

In mid-December, the septet will fly back to Japan to meet up with Japanese fans through two days of fan events and concerts, "BTS 5th Muster [Magic Shop]," from Dec. 14-15 at Osaka's Kyocera Dome.

The final weeks of 2019 have been reserved for Korean broadcasters' year-end K-pop TV shows, including those of SBS and KBS on Dec. 25 and 27, respectively, bringing the superstars back for rare TV appearances.

BTS' return to the South Korean small screen will be greeted with a hero's welcome by rapt fans as it follows the band's sensationally successfully world tour, "Love Yourself: Speak Yourself," and the septet's winning of its third No. 1 on the Billboard 200 albums chart.

Earlier this week, BTS made headlines, winning three awards at the American Music Awards (AMAs), including Tour of the Year.

BTS set to heat up year-end festivities with performances at home, abroad

BTS set to heat up year-end festivities with performances at home, abroad