SEOUL, Nov. 26 (Yonhap) -- SK Biopharmaceuticals Co., a biopharmaceutical affiliate of South Korea's SK Group, said Tuesday its anti-epileptic drug will be available in the United States in the second quarter of 2020.

Last week, SK Biopharm's XCOPRI won the sales approval from the U.S. Food and Drug Administration (FDA) for the treatment of partial-onset seizures in adult patients.

The approval marked the first time a South Korean company has applied for FDA approval for a drug on its own and received it. SK Biopharmaceuticals has been developing the anti-epileptic drug since 2001.

With results from clinical trials on 2,400 patients in the world, SK Biopharmaceuticals submitted a new drug application for cenobamate tablets to the FDA last year.

"It usually takes an average of between 10 and 15 years for a single drug to be developed," CEO Cho Jeong-woo told reporters in Seoul. "We have been supporting XCOPRI after establishing a mid- to long-term plan." 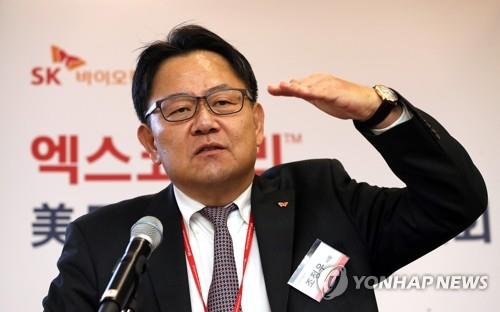 "Revenues nearly halve if we market the drug by cooperating with other companies. That is why we have prepared a pipeline by injecting sales personnel," Cho said,

Epilepsy is a common neurological disorder characterized by seizures. According to industry data, the global anti-epileptic drug market is expected to grow to US$6.9 billion in 2022, up 12 percent from last year.

A study by the Centers for Disease Control and Prevention showed that approximately 3 million adults live with epilepsy in the U.S. and nearly 60 percent reported having seizures, even if they took an anti-epileptic drugs.