Paik, who served as corps commander and Army Chief of Staff during the 1950-53 Korean War, turned 100 in Korean age on Saturday.

Abrams visited Paik's office in Seoul on the eve of his birthday and sent a congratulatory message, according to officials.

Releasing photos of Abrams meeting with Paik in a Facebook post, USFK said Paik "is a true #WarriorLeader who continues to inspire many of us even to this day."

Born in 1920, Paik graduated from a military academy in Manchuria in 1941 and became an officer of the Manchukuo Imperial Army.

Upon the outbreak of the Korean War in 1950, Paik was assigned to lead the first Army infantry division. Under his leadership, the division played a critical role in deterring North Korean troops from taking over the entire South in what is known as the Battle of Tabu-dong, one of the fiercest battles of the war.

After his retirement, the general was appointed ambassador to Taiwan in 1960; to France, the Netherlands and Belgium in 1961; and to Canada in 1965. He also served as transportation minister from 1969 to 1971.

In honor of his service, South Korea created the General Paik Sun-yup Award in 2013, which has been awarded to one U.S. personnel member considered to have contributed to the nation's security and alliance. 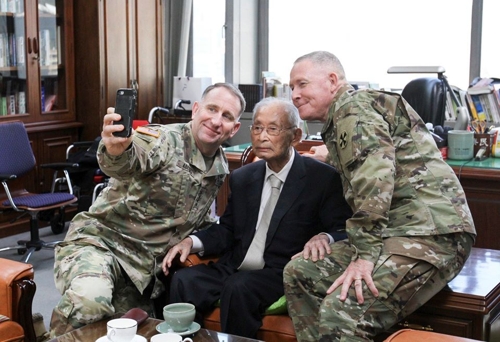