The investment decision comes as Hyundai Motor is working to explore new markets and secure a new growth driver amid slowing growth in the global automobile industry.

Hyundai does not have a production facility in any of the Association of Southeast Asian Nations (ASEAN) countries and its sales remain weak as Japanese carmakers have long claimed the lion's share in the markets. 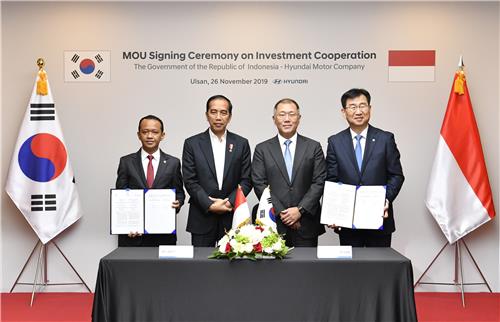 Chung made the comment after signing an investment contract with Indonesian President Joko Widodo at Hyundai's main Ulsan plant, 414 kilometers southeast of Seoul.

President Widodo said, "If Hyundai Motor advances to the Indonesian market, Indonesian people will have other options to choose from than Japanese vehicles. We do hope Hyundai will be successful in their investment (in Indonesia)."

The ASEAN automobile market is expected to grow to 4.49 million units in 2026 from 3.16 million in 2017. Indonesia has the world's fourth-biggest population of 270 million and it is the biggest automobile market in the ASEAN region, selling 1.15 million autos last year.

To grasp rising demand, Hyundai aims to start production of 150,000 vehicles in the plant at the end of 2021 and gradually increase the output volume to 250,000 units a year depending on market demand, the company said in a statement.

Hyundai's investment in the Indonesian plant will be made from now until 2030.

The company plans to manufacture compact sport-utility vehicles and multi-purpose vehicles at the Indonesian plant, while all-electric vehicles customized for the Southeast Asian market are under consideration.

Hyundai's vehicles assembled in the Indonesian plant will be exempt from high import tariffs ranging from 5 percent to 80 percent imposed by ASEAN countries and a variety of non-tariff barriers, the company said.

The maker of the Sonata sedan and the Santa Fe SUV is considering exporting vehicles produced at its Indonesian plant to other ASEAN markets, such as Thailand, Vietnam and the Philippines as well as Australia and the Middle East, it said.

Hyundai's investment decision in Indonesia is in line with the Moon Jae-in government's "New Southern Policy," which seeks to beef up cooperation with the 10-member ASEAN, an increasingly crucial partner due to its economic potential, resources and growing diplomatic influence.